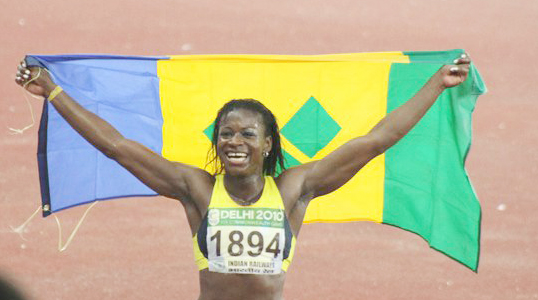 Vincentian athlete, Natasha Mayers reacts after her race in 2010.

California-based Vincentian sprint star, Natasha Mayers, says she needs financial help as she prepares to defend next year the gold medal she won at the Commonwealth Games in 2010.

Mayers was awarded gold in the 100 metres in the 2010 Games, after two other athletes were disqualified after the event.

“The last time when I won the Commonwealth Games, I was able to fund preparations … because I had worked for two years as a school teacher,” Mayers, the first Vincentian woman to win a Commonwealth Games medal, told I-Witness News.

“But, right now, it is very difficult; I am not getting any type of help to even prepare for this competition,” she said.

“I don’t want to be rude, but there is no value in the athlete. I guess there is a lack of understanding of what it takes to win a Commonwealth gold medal like I did. And because there is this lack of understanding, I am not getting any kind of help towards any type of preparation for these games, which is important,” she said.

The 20th edition of the Commonwealth Games will be held in Glasgow, Scotland July 23 to Aug. 3, 2014, and Mayers noted that Jamaica, England, and Australia will also take part in the Games

“These are some of the biggest countries with athletes. They understand what it means, because, Jamaica, you read their newspapers … [and] you read about their preparations for these games,” Mayers said.

She said it is “the hope” that she again represents St. Vincent and the Grenadines at the Games.

“However, I really want to emphasise that I need help to do so, because, if I don’t make the standard, I can’t represent the country. And I won’t be able to make the standard unless I get some assistance. I need financial assistance; that’s what it takes,” she said.

Mayers said that living in the United States, it takes US$2,500 a month to pay for her training for the games.

She said that while preparing for the 2010 Games, she wrote to the Olympic Committee, and a state official in SVG.

“… I really didn’t get any type of feedback or any help,” she said.

She said that she used to teach in California, “but it just became very difficult in the last two years to teach and to run”, adding that she has since started a fitness instruction business.

Mayers, 34, has been living in the United States since she was 11.

In 2000, she made the Olympic standard but was not yet a U.S. citizen and competed for SVG in 2004 Olympic Games, when she was top 10 in the world.

“But I was top 10 in the world because I was running for the University of Southern California and I was getting a lot of assistance for everything — academic and athletics. That’s when I was at my absolute best,” she told I-Witness News.