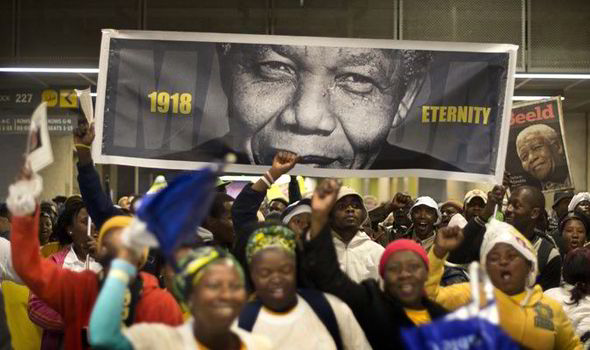 PM Gonsalves has spoken against the ‘sanitisation’ of Mandela’s story. (GETTY)

Prime Minister Dr. Ralph Gonsalves and Opposition Leader Arnhim Eustace on Tuesday led Parliament in paying tributes to former president of South Africa, Nelson Mandela, on the day that a memorial service was being held for him in South Africa.

Mandela, who spent 27 years in prison for his fight for freedom and equality for all South Africans, and resorted to peace and reconciliation after his release, died on Thursday.

“What is amazing was his magnanimity, his capacity to forgive — clearly not to forget.”

Gonsalves said that once release from prison, Mandela could have chosen “another road, not one of reconciliation and forgiveness, but he felt that that, in all probability, would have let to a bloodbath.

“He knew the road upon which he embarked was full of contradictions. He knew he had to make peace with the white power structure, big capital, and he knew that this had dangers,” Gonsalves said.

He said Mandela was against corruption by black people as much as by the white people. “He was also against the brutalisation of citizens by whichever power structure and the same equality that he rightly knew and claimed for himself, he said that that belongs to all other persons of whatever race and whatever social condition, and that is why I say he was a man after God’s own heart.”

Gonsalves noted that the memorial service for Mandela was being held on Dec. 10, international human rights day, and noted Mandela’s efforts to secure the rights of all South Africans.

Gonsalves also pointed to Mandela’s familial background, saying the lawyer was “a man from royal stock, possessed of an aristocratic bearing, but humble to the core, and connected to the common man, to the people.

“[He] didn’t compromise his principles for any one,” Gonsalves said, adding, “When we speak of him, we often tend to forget he was a human being … because the myth has grown so large.

“But, Honourable Members, I ask us to remember this, he spent 27 years in jail, not having the company of his wife, and that took a toll on that relationship. You can just picture it,” Gonsalves said.

Mandela’s marriage to Winnie Madikizela–Mandela survived his incarceration, but ended after his release from prison.

“Well, maybe today we should all resolve among ourselves, as part of the upholding of the legacy of Mandela, that we should try to be less bitter with one another, not to be bitter at all; to be forgiving; not to say that justice must not be done in cases where that is necessary and desirable, but to be forgiving …” he said, urging that citizens take seriously the section of the Our Father Prayer that speaks of forgiveness.

“Sometimes, in the robust competitive politics of Westminster, we forget these things; we should remember them today,” Gonsalves said as he expressed condolences on behalf of the government and people of St. Vincent and the Grenadines to Mandela’s widow, his former wife, and his children, grand children and great grand children.

Meanwhile, Eustace described Mandela as, “an amazing man, an icon, someone whose influence has spread throughout our world, someone of grit, great determination, integrity and kindness”.

“A light has gone out in our world,” he said, as he recalled watching, along with eight families from across the region in Barbados in 1990, media coverage of the release of Mandela from prison.

“Such was the influence of the man that in a small Caribbean island, people of all walks of life gathered together to view his release from prison. We recognised it as an epic moment and intuitively felt its impact on us, and so we gathered to listen and to watch,” Eustace said.

“I remember seeing him coming out with his wife, Winne then, and the way he waved to all those persons, gathered to see him being released.

“Although I had heard a lot and read some about his time in prison, I never expected this reaction. I never anticipated the line he would take — the line of reconciliation,” Eustace said.

Eustace said given that Mandela spent 27 years in prion, “one would expect a bitter, and indeed, possibly a violent reaction even before he became the first black president of South Africa.

“… it is a profound lesson for all of us that a man who has suffered so greatly in a physical and emotional sense, would have the courage, the temerity to approach freedom for his country on the basis of reconciliation and forgiveness.

“It is very hard to believe, for when you heard the stories of South Africa, including the death of [anti-apartheid activist] Steve Biko, the way people were treated, one was angered.

“Even here in the Caribbean, many people where angered by that treatment. And to know somebody who was the recipient of that treatment could then stand and turn around and say, ‘I forgive you,’ in the interest of … the development of his nation … is remarkable…” Eustace said.

He said he was sure that many South Africans disagreed vehemently with Mandela’s stance.

“… but today, he is gone and the glow of his light will remain and affect South African forever. It will also affect, Mr. Speaker, other countries, because of the example of Nelson Mandela,” Eustace said.

Eustace said that even as he grappled with Mandela’s approach, he was even more convinced when the former prisoner was being sworn in as South Africa’s first black president.

“This is a man who brought his jailers to sit in the front row at his inauguration. Think about that. Do you think you can do that?

“… it speaks of someone with enormous internal strength, forgiveness at the highest level, and love and concern and his country and his people

“No wonder, as we looked this (Tuesday) morning at the television at the memorial service, people entered the stadium dancing in their usually South African way. It was a moment of celebration because they understood the light that he shone and they expect that light to continue,” Eustace said, adding, “…

“When President Obama shook [President of Cuba] Raul Castro’s hand this morning, … they immediately started to talk about their impact on the United States and their politics. They lost the meaning embodied in that shake of hand,” Eustace said.

“And we here in this society must recognised that kind of approach and what it really means and what it can do for us, our country, our people, to the extent that we can take action of those sorts and have those kinds of beliefs, redound to our eternal benefit,” Eustace said.

“I don’t want to say much because much has been said all over the world. But I want to say this: Nelson Mandela has set an example for this world, for all the people of this world, and to such an extent an important example that he remains forever in the hearts of people and countries all over this world.”

“He was free from the prison of hate and went to the church of reconciliation. I really admire that man. I am sorry, like many people, millions all over this world, but his light will continue to shine,” Eustace said as he expressed condolences on behalf od his New Democratic Party and himself.

“I wish his family well, I wish South Africa well, and I wish all the world well,” Eustace further stated.

One reply on “Gonsalves, Eustace pay moving tributes to Mandela”