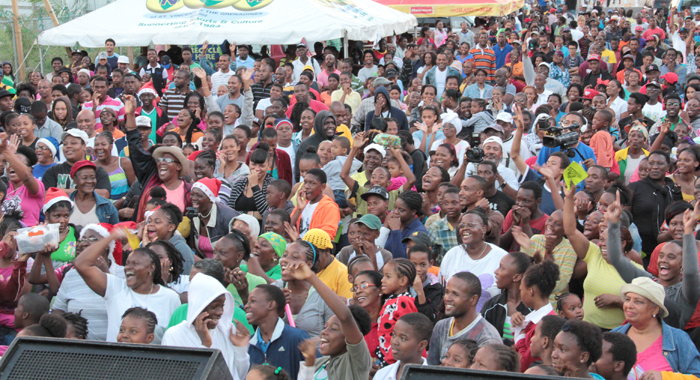 A large cloud turned out to Nine Mornings on Monday. (IWN photo)

This country on Monday began celebrating what the Ministry of Culture has branded as the 100th anniversary of the Nine Mornings festival.

But historian Dr. Adrian Fraser has accused the Ministry of making the declaration without evidence, saying, “As a historian, I dispute that.

“Quite a number of people over the years have been trying to trace the source of Nine Mornings. And, as far as I am aware, nobody has come up with a date or how it started,” said Fraser, who has been using the media to explain his objection.

Fraser said that when the Ministry of Culture declared that 2013 is the 100th anniversary of the celebration of the festival, he checked to see if there was “anything at all to indicate that 1913 would have been the time when Nine Mornings started.

“And in fact, when I looked at the Ministry’s website, they themselves admitted that it isn’t clear when Nine Mornings started. But … they went on to say that they are celebrating the 100th anniversary this year, which doesn’t make sense,” Fraser told I-Witness News.

“At one point, they also said this is the most approximate date we can get. So, it is clear that they have no evidence for that. Once this issue was raised, I thought it was up to them to reassure the public that they have the evidence. And I don’t think they do.”

Fraser said he thinks the Ministry’s declaration is inappropriate.

“When you are dealing with your culture, your history, when you are trying to promote tourism, you don’t want to debase and defame it, and to suddenly come up with this, where there are questions about it. I don’t think that does very much to our integrity as a people and to our intellectual ability.

“You can’t just come, pick a date out of a hat and tell us that we are celebrating the 100th anniversary. You must have some evidence that this is so. And the way they went about it, I think is just disrespectful of the nation,” Fraser told I-Witness News.

Asked if his research show any significance of this year in relations to Nine Mornings celebrations, Fraser said, “No, not at all.

“I mean I could understand that a hundredth anniversary of Nine Mornings would be important, because Nine Mornings is such a unique activity. But if you do not know the day, why go ahead and take the nation along with you,” he added.

Asked to suggest a better approach, Fraser told I-Witness News, “They still need to do some investigation.

“There is really no need to come up with a hundredth anniversary at this time. They have students at the Community College who could be given a research project, speak to older people, check at the Archives and see what they can up with. You don’t just pull something out of the hat like that. I think it is totally irresponsible,” he said.

Meanwhile, chair of the National Nine Mornings Committee, Michael Peters, acknowledged that there is no agreement on when Nine Mornings started but said that 100 years ago, the festival was legalized.

“… in 1912, the Government of St. Vincent and the Grenadines, through the police, gave permission, legalized whatever was happening. So, from 1913 onward, it became legal. The dates were stipulated, from the 14th to the 24th, the time was stipulated, from 5 to 6 in the morning.

“So, what we are celebrating is the 100th anniversary of what legally became Nine Mornings in St. Vincent and the Grenadines,” Peters further said.

He further told I-Witness News that this year’s celebrations will be “exceptional”.

“We are making the festival very traditional. All of the things which form part of the tradition of Nine Mornings, we are bringing them back into the festival this year,” he said, mentioning, among other things, street parades, pan-around-the-neck, and drinking, eating, and crying competitions.

“We are going to involve as much as possible every member of the family, every sector of the population. So, it is about total involvement and as traditional as possible, the 100th anniversary,” Peters told I-Witness News.

A large crowd, including visitors and returning nationals attended the opening morning of the festival in Kingstown on Monday.