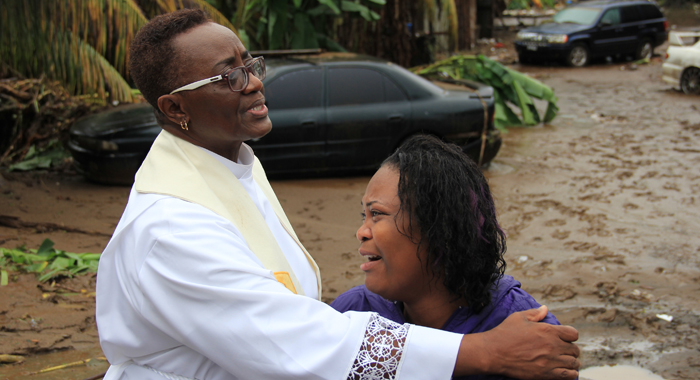 Rev. Eleanor Glasgow prays with Colleen James in Cane Grove on Wednesday, hours before it was confirmed that James’ sister, Kesla, had died in flood waters. Her 2-year-old daughter is still missing. (IWN photo)

The loss of life was most significant in North Leeward, in northwest St. Vincent, where five members of one household died when a slope collapsed unto their house in Rose Bank.

One person died in Byera on the western side of the country and 43-year-old Desmond Wilson died after being swept away by floodwaters Tuesday night in the South Leeward community of Vermont.

The body of 18-year-old Kesla James, who, along with her 2-year-old niece, was washed away in Cane Grove, was recovered in the Central Leeward community midmorning Wednesday.

Inka Jack, 12, and Josell Small, an employee of Buccament Bay Resort, both of whom were swept away by floodwaters at separate locations in Buccament Bay Tuesday night, were still unaccounted for.

“It is not a merry Christmas at all. Basically, the mood of the people who are around here, having seen the devastation down here, a family of five succumbed in Rose Bank, has left a sombre mood on the village there,” journalist and lawyer Carlos James, who is vying to be the ruling Unity Labour Party’s candidate for North Leeward in the next general elections, told I-Witness News on Wednesday.

James said that he was there when the five bodies were recovered from under debris but was unsure about their identities.

“I can safely say I think two adult women and two young children; I can’t give you an indication as to what their ages are,” he told I-Witness News via telephone from North Leeward.

“A lot of persons are out and supporting each other,” he further said, but noted that water and electricity had not been restored to the area, the nation’s largest constituency.

The National Emergency Management Organisation (NEMO) said that 50 per cent of consumers island-wide are without pipe-borne water and the Central Water and Sewerage Authority has said that residents of the southern swath of the country — from Layou, South Leeward, Kingstown and its environs right through to Villa — “will be without pipe-borne water for an extended period from today, Christmas Day”.

“The traffic there is rendered immobile for now,” he said of Cumberland, adding, “[There is] a lot of housing and livestock damage in Spring Village.”

He said there was a lot of flooding in the areas close to the river in Spring Village and that the only bypass road to and from Kingstown “took some beating”.

The houses on the flat in Charles Village were flooded out, James further said. “So, quite a lot of infrastructural damage,” he said.

In Cane Grove and Buccament Bay, there was also mourning, as the body of 18-year-old Kesla James was recovered midmorning Wednesday and hope for finding alive the three other missing persons faded.

Kesla was among several persons, including her sister, Colleen James, who left their mother’s house to seek refuse after it began to flood. The James’ mother won the house, which borders the riverside, as part of her “Set For Life” winnings from the National Lotteries Authorities some years ago.

Colleen, who lives in Canada and is visiting with her four children for Christmas, told reporters that they decided to leave the house after police, who they contacted via telephone, advised them to try to do so.

She said that her mother and another person in the house decided to stay.

Curt “Kebra” Clifton, who lives in Kingstown and had gone to visit his friend, Junior Cambridge, in Cane Grove, helped to rescue Stella and one of her children.

Cambridge’s house also provided refuge for a young goat that was washed inside when the house flooded, destroying the furniture and electronic appliances on the ground flood

Clifton said he and Cambridge were looking outside at the strange, almost continuous, flashing of lightning. (See video) “When we looked around the house, we saw people and heard voices. We looked across by the neighbour and saw three persons floating away down to the river.

He said that when the waters “settled down”, they went outside in the chest high flood, and were able to rescue Colleen and one of her daughters.

“My brethren almost got pulled under by the girl, because she was so panicking that she ended pulling him under with the searchlight and I had to grab his hand,” Clifton told I-Witness News.

About two hours before her sister’s body was recovered, Stella was seen at the side of the road crying, and praying for a positive outcome.

“I never do nothing wrong; I always good,” she cried as a cleric attempted to console her, then later prayed with her.

“Please work a miracle; I know you can,” she prayed. “Maybe they are unconscious God, but they are alive. I want them to be alive,” she further prayed amidst wailing.

A few hours later Kesla’s body was recovered, sandwiched against a wall near a large culvert laden with debris.

After her sister’s body was taken away, Colleen told reporters what happened after they left her mother’s house the night before.

“We all were going together, but the water came down heavy and it just turned us over,” she said, adding that they were being submerged by water as they attempted to regain their footing.

She said one of her sons grabbed onto her leg, while another held unto her uncle.

They were able to make it to a wall then onto a tree, where they were later rescued.

The uncle, Glenny James, told reporters that he had a child under each of his arms and were holding on “for death and life”.

But he fell as the water got heavier and then the electricity went out, throwing the place into darkness.

On the coast, in Buccament Bay, Caston Barber of Questelles, was trying to keep hope that his 12-year-old daughter, Iynca Jack, who lives with him in Questelles, would be found alive.

She went to Buccament Bay to spend Christmas with her mother, and the two of them were swept away, but her mother was found alive in a tree, he told I-Witness News.

A few hundred yards away, on the beach just outside Buccament Bay Resort, Ricky Small was waiting for the Coast Guard to turn up to conduct a search for his wife, Joselle.

He declined an on the record interview but said they both have a 1-year-old child together.

Small earlier told journalist Jerry George that he was told that his wife was swept away as she and two of her co-workers made their way home from work.

He said one of Joselle’s co-workers said that they walked to the edge of the road because of the flooding and the road gave way.

Two of them fell over and Joselle was washed away.

They incident took place outside the resort, where two vehicles remained partly submerged under water on Wednesday.

At the resort, access to the beach was restricted, because, a security officer said, electrical cables were exposed there.

In Vermont, Blessing Williams told I-Witness News that her brother, Desmond Wilson, 43, was having a drink with some friends then left to go home around midnight Tuesday.

He was washed away by floodwaters and his body found along the riverbank on Wednesday.

In addition to the loss of life, there was extensive damage in the Cane Grove–Buccament Bay area and other districts across  the country.

Harold Fraser told I-Witness News that he estimates up to EC$300,000 in damage as a result of the flooding of the ground floor of his home, where his business was located.

One of his vehicles was washed away and the deluge damaged another.

Retaining and fencing walls on many properties had collapsed, and some persons had begun to clean up Wednesday afternoon.

The torrential result from a trough system that has also resulted in loss of life and damage to infrastructure in St. Lucia and Dominica.

55 replies on “Death toll from extreme weather in St. Vincent rises to eight”