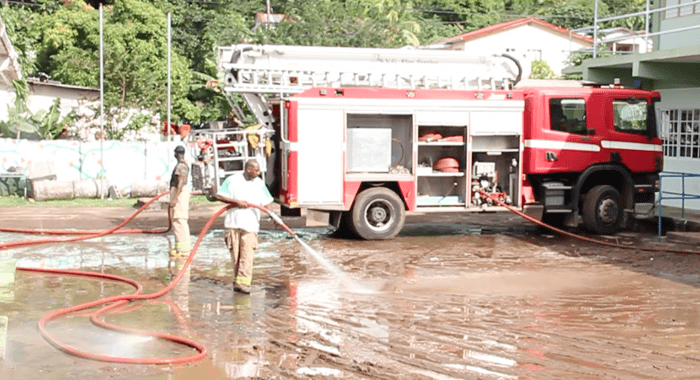 On Thursday, firefighters clean mud from the yard of the Buccament Bay Secondary School, were 53 persons were had sought refuge. (IWN image)

Friday has been dubbed clean up Kingstown day, as the rebuilding commences here, beginning with the nation’s financial and administrative nerve centre.

Prime Minister Dr. Ralph Gonsalves, who returned to St. Vincent around 6:30 p.m. Thursday, after a shortened vacation in Europe, has told Vincentians in a radio address that hundred of millions of dollars will be needed to repair the damage left by torrential rains Tuesday night.

The flooding and landslides that the rains triggered, claimed eight lives and five persons were still missing on Thursday.

(Click for photos of the damage in the Buccament Bay area)

Gonsalves said he attended a meeting with emergency officials as soon as he returned to the country 6:30 p.m. and was briefed on the situation.

He thanked God for his blessing, saying, “as difficult as the circumstances are, … we are fortunate to be alive. …

“It pains me greatly. Those who have suffered material loss, I am also deeply pained and I give you my word I will do my best to help.”

However, he was upfront about the enormity of the damage.

“We have had a very difficult hit,” he said, noting the number of dead and missing, and expressed condolences to the families and friends of those who died.

“We will remember these persons always,” he said.

“When the dust is settled on this, we have to build a monument to those who died …” he also said.

Gonsalves said the briefing he received indicate “a disaster of a proportion the likes of which we have not seen in living memory”.

The disaster left hundreds of millions of dollars in damage, he said, adding, “Over the next few days, we will get a clearer picture as to the full extent.”

Given the state of Kingstown, the Ministries of Works and Health have advised that activity in the city be kept at a minimum on Friday, but a bank holiday has not been declared.

Gonsalves called for all workers in essential services to report to work. He mentioned VINLEC, CWSA, the Ministry of Works and BRAGSA, the Ministry of Social Development, police officers, medical personnel, the Port Authority, NEMO, the Ministry of Finance and Planning, including the Treasury, Customs and Excise, Inland Revenue Department, financial institutions and insurance companies, gas stations, and supermarkets.

Gonsalves also called for staff at the Cabinet office to be at work.

“I want to repeat, it is not a bank holiday… but tomorrow is essentially clean up Kingstown,” he said, adding that while he would like to see essential businesses operating, the city should not be a thoroughfare.

He noted that getting to Kingstown from some areas of the country will be difficult because of the condition of the road network.

Gonsalves will leave Kingstown for a tour of the Leeward (western) side of the country at 7 a.m. on Friday. He said he will travel directly to Rose Bank, where five persons died when a house collapse.

During the trip, he will also visit Sweet-I Robertson, who is paralysed after being shot in the neck some years ago.

Gonsalves will visit other affected communities on the Leeward side as he makes his way back to Kingstown, then will travel to the Windward (eastern) side of the country later on Friday.

He has invited all local contractors, and foreign contractor who have done work for the government, to a meeting at 10 a.m. Saturday.

He said that while his government does not have upfront all the money needed to complete repairs, it is wiling to talk to bankers to see if contractors’ overdrafts can be increased and interest rates reduced.

The government is also prepared to act as a guarantor for the release of funds to expedite the works.

He thanked state officials and state agency and persons in the private sector and all areas of the society for their response.

“I want to say how pleased I am that Vincentians have worked together at this time of natural disaster to help one other,” Gonsalves said, and urged the continuation of the sprit of camaraderie.

Gonsalves said he was not expecting

such unusual weather towards the end of the year, but noted the flood in April 2011, which also devastated parts of the country.

He said that when he first heard of the scale and magnitude of the disaster he was “driven to tears”.

He said that road network is “a terrible state, with “real difficulties” north of Caratal and blockages north of Sandy Bay.

He said that given the experience in April 2011 and the extent of the damage to main roads, he is anticipating extensive damage to the feeder road network.

He said he has not gotten a proper report about Fancy, a community on the northern tip of the country.

Minister of Works, Sen. Julian Francis, was on in the Leeward side and was assisting with assessment and recovery there.

Gonsalves said that while the assessment is being done to put things together to do essential repairs, the nation has to remember the many people have lost houses, adding that 10 house.

Some 70 persons are in emergency shelter, and Gonsalves noted that arrangement have to be made to feed them.

He said that while some houses are still standing, many persons have lost all furniture, clothing, and other belongings.

“We have to move fairly swiftly to see how government and citizens can work to return people’s lives to some normalcy,” Gonsalves said.

“This is a big task, the very assessment itself, but we can’t take too long,” he said, even as he urged proper assessment to inform the scope and type of works.

He said building material and asphalt are needed and his Government will seek assistance from other countries in this regard.

He said this country will not be asking for outside donation of food, because they country can provide that.

Matter related to emergency shelters will address in a normal manner — the structure and organization of the State.

Parliament earlier this month approved EC$911 million in Estimates of income and expenditure for 2014. Gonsalves said he will have to ask go back to Parliament with other requests for resources and for amendments to the Estimates, “because this is a national disaster of phenomenal proportion”.

Gonsalves reiterated his call for citizen to not abandon the sense of unity of the past few days.

He noted that the country’s geographical location cannot be change, and comes with beauty and other natural blessing, but also weather systems, which resident have to take as part of natural conditions.

He said tourists were also on his flight to St. Vincent, some of them heading to Buccament Bay Resort, which also suffered some damage.

“If tourists can still be coming to us, with problems with some of the resorts, … we have to realize that we ourselves, this is our country, we have to work together. … Each of us has to be heroic in this immediate period. We have to lift our game,” he said and urged citizens to rise “beyond what we normally say is our best”.

He said electricity has been restored to most of the Leeward side of St. Vincent but parts of Chateaubelair, in addition to some areas north of the Rabacca Dry River, do not have electricity.

Gonsalves noted the extensive damage to the Cumberland hydropower plant, and said that reduced generation would lead to higher fuel surcharge.

“So, that is a challenge which we have to meet,” he said.

Half of the country was still without water, and the supply was expected to be reconnected, progressively, by Tuesday.

Gonsalves said that his own residence was without water, and added that he would have to cope like everybody else.

“We all have to adjust ourselves to the circumstances in which we find ourselves,” he said.

He asked that persons in emergency shelters bare with shelter managers, adding that arrangement are being made for proper management of the shelter.

He said that president of the Caribbean Development Bank has requested a conversation with him on Friday, and Trinidad and Tobago has inquired about assistance that is needed immediately.

The World Bank, ALBA Bank, Petrocaribe, and the European Union may also be approached for assistance.

Gonsalves, however, said that the difficulty is that given the nature of the CDB, the World Bank, and the European Union, it will take up to two years before any real money comes from them, making such disbursement more suitable for less immediate programmes.

“But I have to mobilise loads of money immediately, where we can’t wait, given the enormity of the task which is before us,” he said.

The country’s main hospital, Milton Cato Memorial, require no less than EC$3 million to do basic restorative work and equipment, he said, and an assessment will be made regarding possible repair of the country’s only CT scan machine which was damaged in the deluge.

But while he focus on the work to be done in St. Vincent, Gonsalves expressed solidarity to St. Lucia where six people died, and Dominica, where there was infrastructural damage as a result of the rains.

He also expressed solidarity with other countries, including Brazil, Mexico, the United Kingdom and Canada, which experience extreme weather events recently.

“We are part of humanity and we are joined together by a common weather system …” he said, adding “They all (countries) belong to planet earth”.

“Let us lift ourselves, let us work together, let us remember that we must love one another, let us pray to Almighty God to make us better, let us endeavour to be better to one another, let us in this very small country stop all senseless backbiting and fighting over nothing, let us get rid of all our vanities as is humanly possible, let us look out for one another,” Gonsalves said.

“As Prime Minister, I promise you to do even better than I have tried to do. Let us work together, we will recover, we will rehabilitate this country and we will do it in the shortest possible time,” he said.