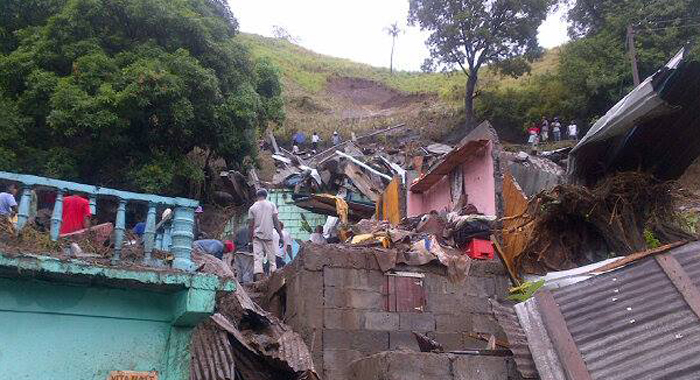 Officials from the National Emergency Management Organization (NEMO) and the local Red Cross Society were late Thursday evening sailing to North Leeward, which had been cut off from the rest of the St. Vincent as a result of multiple landslides after the torrential rains on Tuesday.

Michelle Forbes, deputy director of NEMO, told I-Witness News via telephone late Thursday evening that she was being accompanied by President of the Red Cross Society, Bernard Morgan, and police officers.

“We have not been able to access these communities, so we are going to try to visit,” Forbes said.

North Leeward also includes Rose Bank, where five persons died when their house was covered by a landslide Tuesday.

Three other persons have been confirmed dead, while five are missing in other parts of the country, state officials say.

“We know it is night but we need to at least visit the communities to let them know that we have their concerns; visit the emergency centres and the areas that have been affected,” Forbes told I-Witness News of the trip to North Leeward.

She said the delegation was travelling on vessel that could dock on a beach.

Several persons remained in an emergency shelter in Rose Bank.

Carlos James, a journalist and lawyer who is hoping to become the ruling Unity Labour Party’s candidate for North Leeward in the next general elections, constitutionally due in 2015, said they persons were in high spirit notwithstanding their loss.

About half of St. Vincent remained without water on Thursday, three of the nation’s water distribution systems having been damaged during the disaster.

While electricity was reconnected to most of North Leeward, James said, there were still “some issues” with water, as some of the main pipes in the mountains were dislocated during the rains.

James praised the response of the Ministries of Works and Housing and NEMO and commended Minister of Works, Sen. Julian Francis, who went into the district to conduct assessment on Thursday.

James told I-Witness News via telephone that the roads in North Leeward were made passable Thursday evening, although there was a minor blockage in Fitz Hughes.

But persons in Chateaubelair, a town in northeastern St. Vincent, can now travel by road to Kingstown, he said, adding that a temporary bypass was created in Spring Village.

He further commended VINLEC and the Central Water and Sewerage Authority for their quick response.