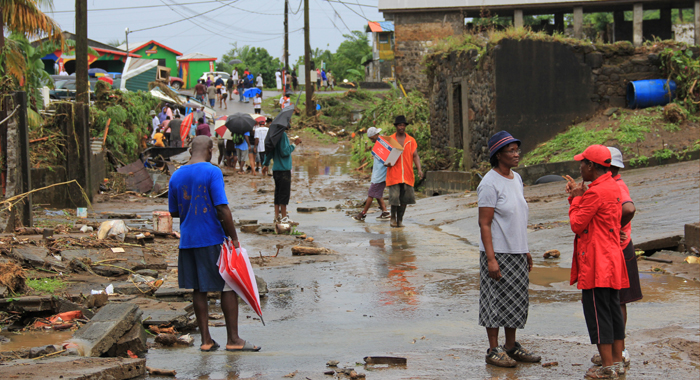 Persons converge in Cane Grove on Wednesday, Christmas Day, where an 18-year-old woman died and a 2-year-old baby is missing. (IWN photo)

Prime Minister of Trinidad and Tobago, Kamla Persad-Bissessar, says that if requested, her country is ready to assist St. Vincent, St. Lucia, and Dominica in the wake of the trough system that has left at least 13 dead, others missing, and widespread destruction overnight Christmas Eve.

The National Emergency Management Organisation (NEMO) in Kingstown has placed housing, food, and water on its list of most urgent requirements.

It was not immediately clear if a request has been made for foreign assistance.

Landslides and floodwaters in St. Vincent killed eight persons and at least five are dead in St. Lucia.

There was damage to infrastructure in all three countries.

A post on Persad-Bissessar’s Facebook page said that as Prime Minister with responsibility for security in CARICOM, her country stand ready to help.

Estimated damage to housing showed that nine were destroyed and 15 damaged.

The Central Water and Sewerage Authority (CWSA) was continuing its assessment in the Vermont and impacted areas and 50 per cent of consumers were without pipe-borne water.

Forbes said it was expected that residents between Layou and Prospect will be without water, at least until Saturday.

The CWSA said Wednesday around 7 p.m. Wednesday that restorative work has already commenced on the Layou system but all of the other systems will require significant work over the coming week in order to have complete restoration. “Interim measures, including trucking of water and limited inter-linking of systems, will be put in place to alleviate any hardships,” the CWSA further said.

The North Windward community of Sandy Bay was inaccessible to vehicular traffic and several blockages from landslides were preventing access to communities in North Leeward.

The Caratal bridge is damaged, and a Bailey by-pass bridge in Colonarie was washed away.

Forbes further said it that it has provided, sleeping bags, comfort kits and jerry cans to those affected and that the Ministry of Transport and Works has commenced initial damage assessment in accessible areas.

The Ministry of Education has activated its Emergency Shelter Committee and two emergency shelters have been activated, in Buccament and Chateaubelair.

The Ministry of Health has conducted several emergency meetings with the Health Emergency Committee.

At the Milton Cato Memorial Hospital, the paediatric, male medical, maternity (delivery), and the neonatal intensive care units have been temporary relocated as clean-up operations continue.

The psychosocial support team, led by the Ministry of Health, is providing support to those persons injured from this event.

The Roads Building and General Services Authority (BRAGSA), Ministry of Transport and Works and the Forestry Department continue their road clearing operations.

Acting Prime Minister, Girlyn Miguel, Director of NEMO, Howie Prince, and other Government Officials visited affected areas Wednesday on the Leeward (western) side as far as Belle Isle and Georgetown on the Windward (eastern) side.

The SVG Red Cross Society was distributing jerry cans in affected areas and E.T. Joshua Airport, which was flooded out Tuesday night, has reopened.

Telecommunications provider LIME is also donating food and other supplies to families in the Emergency Shelter at Buccament.