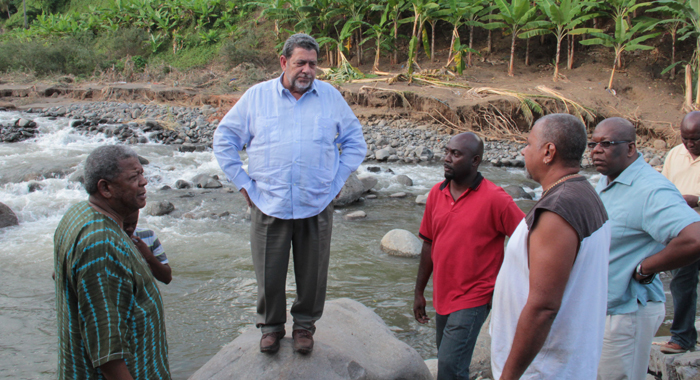 Prime Minister of Antigua and Barbuda, Baldwin Spencer, on Saturday visited some of the areas in western St. Vincent affected by the 12/24/13 disaster and commended the resilience of Vincentians.

Eight persons are dead and five missing — and presumed dead — after torrential rains Christmas Eve that triggered floods and landslides across the country.

Six persons have been confirmed dead in St. Lucia, and there is also damage in Dominica as a result of the low-level trough system that impacted the region during the two days leading up to Christmas.

All three countries are members of the sub-regional grouping, the Organisation of Eastern Caribbean States, which Spencer now chairs. Spencer told journalists that before coming to St. Vincent, he saw some of the devastation on regional television.

“And I kinda thought that it was major damage, but now that I have come and seen the situation first hand, I recognize that it’s been devastating,” he said.

“Clearly, what I am admiring really is the spirit and the resilience of the people of St. Vincent, against the backdrop of what is clearly a devastating experience,” he said.

“And I am here, as I said, to show solidarity with the people of St. Vincent and more particularly, Prime Minister Dr. Ralph Gonsalves. He and I have developed a close friendship and also as the current chair of the OECS Heads, recognizing that three of the member states have recently suffered as a result of the weather patterns, … I thought it was a my duty to come and see for myself exactly what is taking place so that together we may be able to lend support to the efforts that the Vincentians are making in restoring and rebuilding after this disaster,” Spencer said.

He said he plans to visit St. Lucia today, Sunday, and that he has spoken to the prime ministers of the affected countries.

“I get the impression though that although Dominica has been hit, comparatively speaking, St. Vincent has been hardest hit, and then, St. Lucia, and then, of course, because you … had an added phenomenon where there has been loss of life, both here and in St. Lucia,” Spencer said.

“The damage to infrastructure is clearly evident and, as has been said, although the full assessment has not yet been finalised, I would want to believe that we are talking about damage in the region of hundreds of millions of dollars, when you take everything into consideration.”

Prime Minister Dr. Ralph Gonsalves, who also accompanied Spencer on the tour, has also said that the damage is in the hundreds of millions of dollars.

Spencer spoke of the damage to a business owned by Joseph Da Silva in South Rivers, where the river has reduced the size of the land by some 40 feet.

Joseph owns a block-making operation, and a bakery, both of which was damaged, with the blocks and a vehicle washed away.

The businessman said he had suffered damage of about EC$200,000.

“The fact that he is still in fine spirits and he is determined to move on is a classic example of the resilience of Caribbean people, and this has been demonstrated here today,” Spencer said.

“That’ s a lot of money for a young business person,” Spencer said.

“But, at the same time, one senses that he has accepted the reality of the situation, and, of course, I think efforts will be made in helping him to rebuild his life and rebuild his business.

“But I kind of get the feeling that he intends to move on,” the Antiguan leader said.