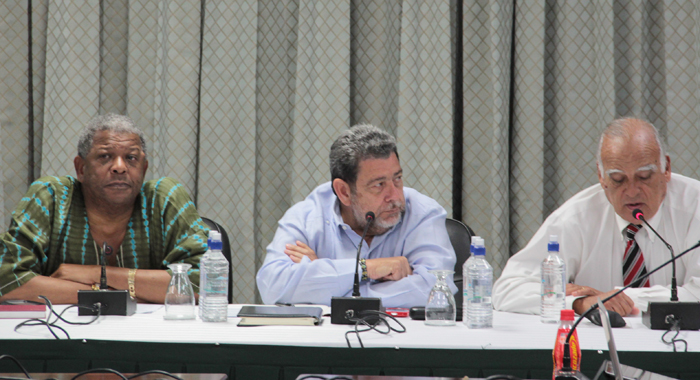 From left: Prime Ministers Spencer, Gonsalves, and Admiral Richard Kelshall of Trinidad and Tobago at the meeting in Kingstown on Saturday, Dec. 28, 2013. (IWN photo)

Chair of the sub-regional bloc, the Organisation of Eastern Caribbean States (OECS) and Prime Minister of Antigua and Barbuda, Baldwin Spencer has spoken about the economic impact of the extreme weather on Christmas Eve on the three affected member states: St. Vincent and the Grenadines, St. Lucia and Dominica.

“It certainly will have an impact, because, clearly, for these three member states, resources, which are every scarce, will have to be found one way or the other to reconstruct, reengineer and rehabilitate,” Spencer told the media on Saturday as he toured two areas of St. Vincent that were affected by the low level trough system, which has left nine dead and four missing and extensive damage to housing and infrastructure.

“So, it will have an economic impact from the point of view of having to raise funds, and you are not going to get all of it gratis — by grant. You are going to have to find ways and means of getting the resources to do that,” the head of the nine-member grouping, which shares a common currency and economic union, further said

“My own view is that in situations like these, particularly where you have a number of members states being affected at the same time, that you have to find a mechanism sub-regionally … that will put these members states out of this major challenge that they

would have on their hands at this time.

“And this is one of the reasons why I have decided to visit personally in my capacity as chair, to make a full assessments, so that we can coordinate our efforts here and make sure that the delivery of support, tangible support, real support, particularly in the area of rebuilding infrastructural situation, that can move on at a pace, because you can’t wait for one, two, three years to deal with these issues. These matters require rapid response,” Spencer said.