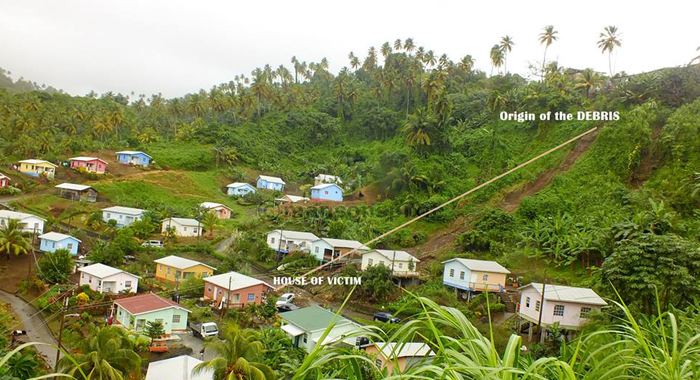 This image indicates the path of the landslide that claimed the life of Raymond Gonsalves, 62, of Manning Village, Byera. (Photo: Manson Shortte/Facebook)

Prime Minister Dr. Ralph Gonsalves says he would like his Trinidadian counterpart, Kamla Persad Bissessar, to join her predecessor, Patrick Manning, in having a village in St. Vincent named after her.

His statement on Saturday suggested an indication of the type of assistance that Gonsalves might be expecting from the oil-rich, twin-island republic after the 24/12/13 disaster which has left the housing stock in some areas in shambles.

Gonsalves made the statement as he briefed the media on the outcome of a high level meeting of local and regional officials in response to the devastation here, following a trough system on Christmas Eve.

Nine persons, including a Sharlani Headley, a 2-year-old baby visiting from Canada, and five members of one household in Rose Bank, have been confirmed dead and four persons are still missing.

Many houses were extensively damaged or destroyed by debris-laden floodwaters.

Gonsalves said persons in some areas would have to be relocated, adding that in South River, a village in the constituency that he represents, a tremendous amount of drainage and river defence are needed, “because lives will be lost up there if we don’t”.

He said the same has to be done in Spring Village, Dark View, and Petit Bordel, three communities in North Leeward in northwest, St. Vincent, Retreat and Vermont in the southern interior, and Spring Village, Georgetown on the north-eastern coast.

Among the dead is Raymond Gonsalves, 62, of Manning Village, Byera, a cousin of the Prime Minister.

The Prime Minister noted the irony of his cousin’s death, saying he was among several persons moved from the seashore in Byera and Gorse after the passage of Hurricane Ivan in 2004.

“He had a nice wall house toward the seas, but the ravages, for him and other persons, of wave action, were too sever, we moved them to a place call Manning Village, after Patrick Manning, because the government of Trinidad and Tobago had provided some resources.

“I would like very much to call a village Kamla Village,” Gonsalves said to laughter while looking at Admiral Richard Kelshall, regional security coordinator in the Office of the Prime Minister of Trinidad and Tobago, who also sat at the head table.

5 replies on “Gonsalves wants a ‘Kamla Village’ in St. Vincent”