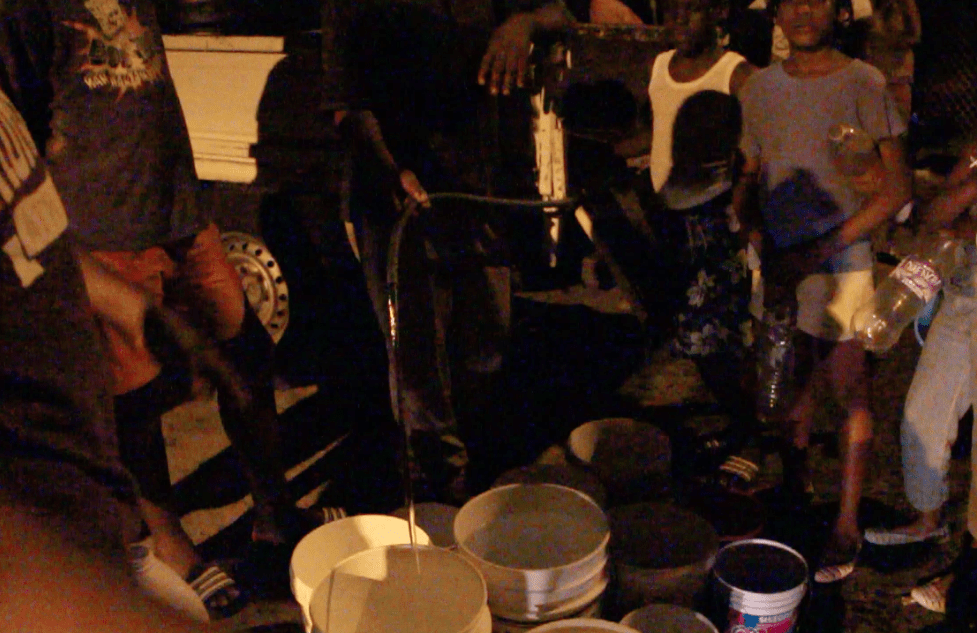 Safe drinking water remains the immediate major concern of the government as it responds to the Christmas Eve trough system, which has left 50 per cent of the nation without pipe-borne water.

Prime Minister Dr Ralph Gonsalves, in a media briefing after a high-level planning meeting on Saturday, said that disaster responders discussed “the immediate question of water”.

By tomorrow, Tuesday, 85 per cent of consumers should have their water supply restored, up from 50 per cent.

The Central Water and Sewerage Authority (CWSA) said on Friday that residents of Kingstown and its environs, Arnos Vale, Upper Villa, Sion Hill, Cane Garden and South Leeward — a large section of the south of St. Vincent — will have intermittent water supply over the next few days until it achieves full restoration of the Dallaway system.

The CWSA further urged residents of these areas to fill up whenever water is available.

On Sunday, the Ministry of Health urged “sound judgment”, saying that one household’s source of water may be another’s waste disposal site and has deployed personnel across the country to educate residents about healthy lifestyle choices and provide water purification tablets to all citizens.

Gonsalves said that more truck will be deployed to supplement the 42 that were already delivering water to the various communities.

Delivery of water to Fancy, which was still inaccessible by road, was being made via helicopter, courtesy the government of Trinidad and Tobago.

“The issue of the water is the most critical, immediate human need, because if we take into consideration that 50 per cent of the country is really without water, though we have 42 trucks on the road, those trucks are still not enough to deal with the problem we have at hand, and this is something which we have to work on, to further strengthen,” Gonsalves said.

He further thanked the Mustique Company for the distribution of water by trucks and appealed to persons with tanks or large water containers or trucks to contact the CWSA, and noted that the filling stations are at Layou, Diamond estate, and Byrea Hill.

Gonsalves said that financial institutions will meet early this week, but have indicated that they will go to their immediate decision makers to assist in providing the requisite financing for the work to be done with the construction companies.

The government will act as guarantors in some circumstances, and financial institutions will convey to their decision makers, “the sentiments expressed here for terms and conditions which are most favourable in all the circumstances,” Gonsalves said.

The nation’s building contractors were scheduled to meet immediately after the larger meeting on Saturday.

“Those are two vital decisions regarding reconstruction immediately,” Gonsalves said.

The Government has agreed with the contractors that the State will expedite the process of awarding contracts, while satisfying “the requisites of openness and transparency and accountability, but at the same time with expedition,” Gonsalves said.

He has also asked the governments of Trinidad and Tobago and Barbados to provide civil engineers and quantity surveyors, “at their expense”.

“We will house them, because we just don’t have the money to pay these engineers. They are going to cost a great deal of money and hopefully, we will get assistance with vehicles from some entities, in addition to we ourselves providing,” Gonsalves said.

He said that the meeting decided that seller of hardware items will be “more sensitive to circumstances which we have”.

There is an immediate need for large quantities of cement, and the meeting was assured that there will be enough cement, and other building material available.

Gonsalves also said that questions have been raised regarding some areas from which people would have to relocate.

He said that in South Rivers, a tremendous amount of drainage has to be done, and river defence erected, “because lives will be lost up their if we don’t”.

Gonsalves said an important decision was made for greater attention to be paid to what is happening in the forest.

The extent of the damage there was revealed during an over flight in a helicopter provided by Port-of-Spain.

Chief Engineer, Brent Bailey, Minister of Works, Julian Francis, and Chief Nursing Officer Peggy DaSilva were on board the helicopter.

“The Chief Engineer gave a graphic report as to the wide expanse in a number of areas where the rivers have spread and the amount of land which has been denuded and the extent of landslides. He suggests the figure, about 10 per cent, which is huge number,” Gonsalves said.

During his visit to the Leeward side of St. Vincent on Friday, Gonsalves commented on the number of logs that were washed downstream, adding one could imagine the damage that was done in the forest.

“And if the logs are not cleared, And if we don’t deal properly with the river defences in the upper areas of the river, … we have a time bomb, a ticking bomb, because when the rains come again, heavily, they would just simply wash down what is, so to speak, in the pipeline, in addition to new material which would come. All of this has implication for future construction of bridges and the live,” Gonsalves said.

Many of the log were not those of freshly uprooted trees and some seemed to have been cut using mechanical saw.

There have been suggestions that persons clearing forest for the illegal cultivation of marijuana felled many of the logs.

But Bailey told I-Witness News that some of the landslides were in areas higher than the elevations where marijuana is being planted.

Meanwhile, Gonsalves also said that representatives of the governments of Barbados and Trinidad and Tobago and the Caribbean Development Bank, and the Caribbean Disaster Emergency Management Agency will report to their principals about this country’s immediate and medium term needs.