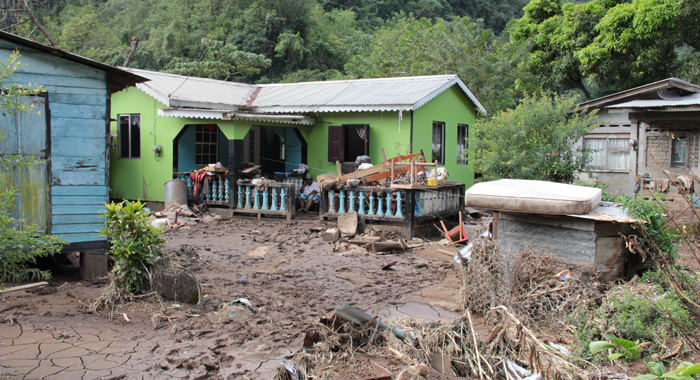 Floodwaters have damaged or destroyed many houses, like this one in Spring Village, N. Leeward. (IWN photo)

The Government says it does not have the capacity to respond to the 24/12/13 disaster that has left nine dead, four missing, and extensive damage to housing and public infrastructure.

Fifty per cent of consumers are still without water, garbage collection in some areas has been suspended indefinitely, and scores of persons remain in emergency shelter.

And Prime Minister Dr. Ralph Gonsalves has warned his Government not to mask the reality of the extent of human suffering in the country.

“It is clear that the capacity of the state, as structured, to respond to a disaster of this magnitude is not at a level where it out to be. There are profound limitations,” Gonsalves said in a media briefing on Saturday after a high level meeting of local and regional officials.

“For instance, in the Ministry of Social Development, we just don’t have enough persons in that area to deal with the extent of the social problems that have arisen — even in terms of the assessments,” Gonsalves said.

He said he is asking the Ministries of Education and Social Development to work together to mobilise teachers to assist with that assessment, since many of them are trained in this area.

“We are asking the Ministry of Health to be mindful of the issues regarding public health,” Gonsalves said.

On Sunday, the Ministry of Health urged “sound judgment”, saying that one household’s source of water may be another’s waste disposal site and has deployed personnel across the country to educate residents about healthy lifestyle choices and provide water purification tablets to all citizens.

(See photos of the disaster)

Gonsalves also noted the reminder by former science minister Jerrol Thompson, a physician, regarding hypertension patients and issues of stresses and strains in the affected areas.

Gonsalves said that real hope must be provided to the affected.

Gonsalves, who is also Minister of Finance, promised that his ministry will be “more proactive, better than we have been in the past”.

He further said that the various ministries “will have to work heroically and all our people to make ourselves better that we are at the moment and to use this real challenging period to lift ourselves and to carry ourselves to higher heights”.

The government has contacted several agencies and governments overseas, and the foreign secretary in Kingstown, Sen. Camillo Gonsalves, has been reaching out to friendly governments, the Prime Minister said.

The nation’s UN envoy, Ambassador Rhonda King, has also been making a general appeal, Gonsalves said, adding that he personally has contacted the ambassadors from Taiwan, Venezuela, and the European Union.

“We appreciate that this is the holiday period and a number of people are simply not at work. It has caught everybody a little flat footed, so to speak,” Gonsalves said.

“In short, the external machinery of the government, we are proceeding. The presence of all representative here from the region would testify what has been happening,” he said.

Saturday’s meeting included Chair of the Organisation of Eastern Caribbean States and Prime Minister of Antigua and Barbuda, Baldwin Spencer, representatives of the governments of Trinidad and Tobago, regional financial institutions, and disaster response and management agencies.

“We are on a path moving,” Gonsalves said, adding, “I don’t have any fear that persons may feel that with all of this gathering and the importance, that we are a disaster area.

“Well, the country is not a disaster area, as a whole. We have declared several areas disaster areas. We have a functioning society going on,” he said, adding that the airports and seaport are open, and cruise ships are coming.

“Sometimes, people are fearful of not speaking what the truth is [because] tourists may not want to come. Well, those tourists who don’t come, I just accept that as a fact of life, but I have to deal with the problem I have in front of me, which is real flesh and blood people who are suffering,” Gonsalves said.

“So, I don’t want to put up any veil, I don’t want to put up any mask, I want us to understand what we are doing. And once people understand what we are doing, it is the best way to attract people to us, Rather than to have a pretence of something otherwise. People are suffering in this country, no question about it. People have lost their lives, families are suffering…” he said, noting that one family in Rose Bank lost five members in the disaster.