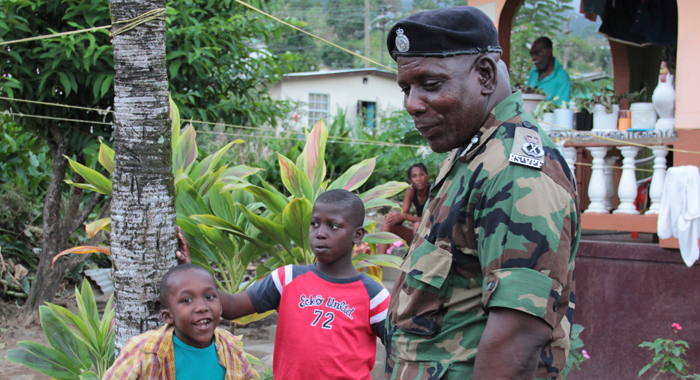 In this Dec. 28, 2013 photo, then acting police chief, Michael Charles, interacts with children in South Rivers. Charles has been appointed Commissioner of Police. (IWN photo)

Career cop Michael Charles, who will on Feb. 28 celebrate 33 years as a member of the Royal St. Vincent and the Grenadines Police Force, has been appointed Commissioner of Police.

Charles, who was acting in that capacity since last year, told I-Witness News on Sunday that he was informed on Wednesday of his appointment, which took effect Nov. 1, 2013.

He said he is looking forward to using his tenure to improve the relationship between the police and the public and to work with residents to reduce crime.

Charles has been acting as the nation’s police chief since former commissioner, Keith Miller, went on pre-retirement leave last year, ahead of his retirement.

Charles joined the Royal St. Vincent and the Grenadines Police Force on Feb. 28, 1981 and has been attached to the Special Services and Narcotics units and the Special Branch. He was also a member of the Prime Minister’s Security Detail.