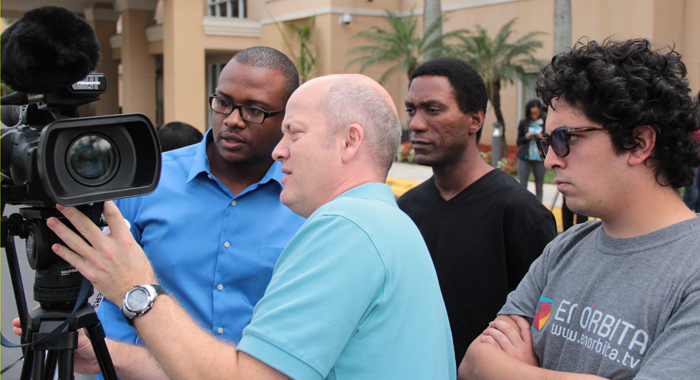 The course brings together groups of media practitioners to exchange ideas from their different experiences, Evelyn Gruber, a news producer at Reuters, said in an interview.

She said the course also gives an insight into what Thomson Reuters does, its work in newsgathering, its principles, dynamics, and how its journalists cover news around the world.

“One of the important things is to provide the tools to journalists to be better story tellers and through that to connect with their audience,” she said.

The course also looked at interviewing technique, the elements of good stories, and, among other things, videography and editing.

She said that with the explosion of media, anybody can pick up a device and call themselves a journalist.

“It’s just an explosion of so much information that I think that a lot of the journalists out there or the organizations are really competing for their audiences. So, they are really trying to dramatise, really trying to shock, to bring the audience in whatever way they can, and, a lot of time, unfortunately, that translates into a little exaggeration or yellow journalism, as they call or it, or kind of losing focus of what we do.

“It creates a lot of stars in the business, instead of us kinda being the tools and providing information for our audiences.”

Gruber said that while it is a struggle, she thinks there is a lot of value in trying to maintain integrity and credibility “in ways that people may view as kind of boring these days, but in ways that I think are really important, because they are the real ways human beings are being affected, rather than everything that blows us”.

Kevin Fogarty, a camera operator and editor at Reuters, the other facilitator at the course, said that the course highlights the relationship between word and video and how they work together to tell stories.

Participants were also taught writing techniques, how to shoot video sequences, and the importance of sound in video production.

He, however, added that the course gives participants tools, rather than rules.

“There is not one way to do everything. If everybody did a story the same way, it would be boring. We are here to show one way, we are here to listen to you and maybe incorporate that in our next class we teach. So, we are learning also,” he said.

The course is also offered to media practitioners from different regions of the world.