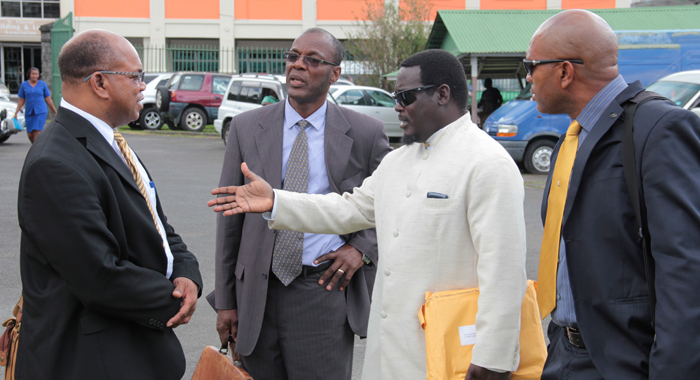 Oppsoition lawmakers speak to each other after walking out of Parliament on Tuesday. (IWN photo)

Opposition lawmakers walked out of Parliament midmorning Tuesday after Prime Minister Ralph Gonsalves decided to wind up the debate on the 2014 Budget, half way into what was expected to be the first of five full days of debate.

Gonsalves said he was winding up the Debate after no lawmaker stood after two calls from the Speaker for further debate on the “interim” EC$911 million budget.

Lawmakers last December approved Estimates of EC$911 million for this year, but Gonsalves said in his Budget Address on Monday, that as a result of the damage left by the Christmas disaster, a supplementary appropriations bill will be brought to Parliament by the end of February.

“Further debate,” the Speaker said again as no lawmaker took to the floor.

Gonsalves then rose and said, “Mr. Speaker, if there is no further debate on the Bill, I think it is an opportune time to wind up the Debate.

“But, I believe we should give one last opportunity, because I am ready to proceed, to wind up,” the Prime Minister further said amidst some giggles from the floor.

“Honourable member –. No further debate? Then, I invite the Prime Minister to wind up the debate,” the Speaker said before banging the gavel.

As the Prime Minister began his response, thanking the Opposition Leader for his contribution, Opposition MPs began packing up and, led by Eustace, walked out.

“Why is it the Government members don’t want to talk in the Budget?” Eustace told I-Witness News outside the parliament building when asked why Opposition Members had walked out.

“We must set the agenda for them to debate?” Sen. Vynnette Frederick commented.

“This is the national budget. The Prime Minister presents as leader, I follow as leader. Everybody is expected to participate in the Budget. … Has any member of the Government spoken on the Budget?” Eustace further told IWN.

“They are not making the case,” MP for Central Kingstown, St. Clair Leacock, further told IWN.

“He (Gonsalves), by his own arguments, said that his ministers will present the case for their respective ministries. It is for us to respond to the presentations of the Government. If they don’t make a presentation, what are we going to respond to?” Leacock further said.

He said he was prepared to speak on the Budget and had informed the Speaker on Monday and again on Tuesday.

“I have to respond to the presentations made by the people who speak for the private sector, and the ministries I shadow,” Leacock further said.

Asked his opinion of the Budget, Leacock said, “That’s the other catch 92.

“The budget is interim in nature. What are we going to respond to? We have to await the substantive presentation when it comes from the supplementary,” he said.

Sen. Frederick pointed out that Government MPs didn’t debate the Estimates in December either.

“They are just staying silent hoping that the Opposition makes the argument that they can respond to. They are living in perpetual opposition on the government side and that is not the way that you govern. During the Estimates, how many of them spoke? Who is running the country?” Frederick further said.

Eustace told IWN that Government MPs had said they are “putting up their things for the Budget Debate because they are not speaking on the Estimates.

“And now you are coming to tell me none of them want to get up.”

Eustace, who is an economist and former prime minister and finance secretary, told IWN that he believes that the supplementary estimates will focus on infrastructural rehabilitation, including river defences, roads, brides, and repairs to the Milton Cato Memorial Hospital.

He, however, said he is concerned about how some of this is going to be financed, adding that he suspects that there will be a combination of both loans and grants.

He said that the loss and damage created by the storm has severe implications for the Estimates that Parliament approved in December.

“And there’s not much sense you go about the Estimates given that you don’t know the extent to which they will be changed,” he said.

“And if you change them, your targets in terms of growth will have to be changed,” he added.

He said it is for the Government to bring those new Estimates and when there is the debate on them, lawmakers can then make more meaningful presentations.

“Otherwise, we are wasting time and that is why I didn’t go through the normal two-hour speech and talk about the Estimates,” Eustace said, adding that the does not know what they will contain and the nature of the financing.

Meanwhile, Gonsalves, in his response to the Budget said that Eustace’s presentation was “undoubtedly … the most shallow presentation made by any leader of the Opposition in living memory in response to a debate.

“Mr. Speaker, what we got was not a response to a budget speech but the making of a series of unsubstantiated political allegations,” Gonsalves said.