Relief distribution can be non-partisan but not de-politicised — PM 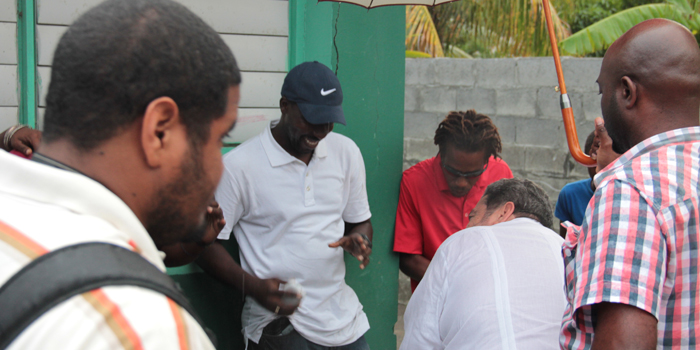 The distribution of disaster relief cannot be de-politicised, but must be done in a non-partisan way, Prime Minister Ralph Gonsalves says.

He said on radio last week that the People’s Movement for Change (PMC), which in early January expressed fear that the Government will politicise the on-going disaster relief, is misled by foolishness.

The PMC, a non-partisan pressure group led by chair, Oscar Allen, and General-Secretary, Ronnie Daniel, called for a bi-partisan agency to overlook the reconstruction after the Christmas floods.

It said it feared a repeat of 2010, where some persons affected by Hurricane Tomas are yet to receive help, while persons not affected have received disaster relief.

The opposition New Democratic Party, has also accused the government of politicising the disaster relief, saying that some persons who suffered loss and damage as a result of Hurricane Thomas in 2010 are yet to receive assistance.

Gonsalves said the PMC is being misled.

“The PMC, with Oscar Allen and Ronnie Daniel, are entirely misled by this foolishness that these guys are talking about.

“In the case of people like Oscar and Ronnie, they talk about depoliticising the process. How can you depoliticise the process? Government is part of a political process.

“What you do is you take out the political partisanship out of the process. Are Oscar Allen and Ronnie Daniel any more honourable and descent than the public servants who are doing the thing to distribute?

“Are they anymore stuffed with integrity too than [Director of the National Emergency Management Organisation,] Howie Prince and those other persons?” Gonsalves said.

“Of course they are not saying that. But I have to put that question because the Government has arisen out of a political process but the Government is the government of the people as a whole. They mistake the issue of competitive politics for something else,” Gonsalves further said.

“Competitive politics doesn’t have to be intolerant, it doesn’t have to be discriminatory of one group as against another in the carrying out State functions. And I say unequivocally, in relation to the distribution of goods and services in this disaster and previous disaster, under this government, there has been no political discrimination.

“What Ronnie and Oscar must do is to go to NEMO (National Emergency Management Organisation) and see how they can work with NEMO, not to snipe round the sidelines,” Gonsalves further said, adding that he had expressed this view to Daniel in a telephone conversation.

“And they must stop trying to create confusion where there is none. And they must not buy into a mode of discourse which is anti-national — posing as though it is national but is fundamentally anti-national,” Gonsalves further said.