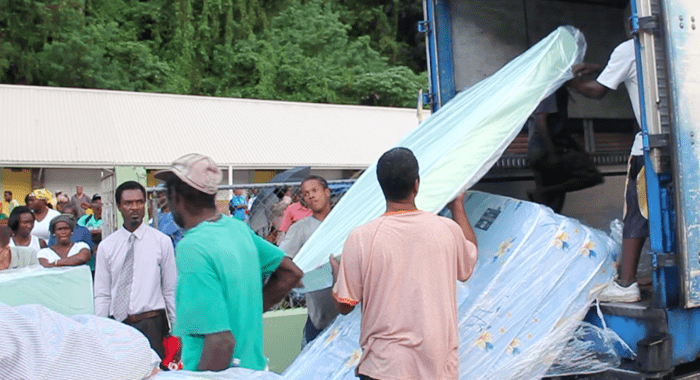 Spring Village residents whose homes and appliances were damaged or destroyed in the Christmas Eve floods received new stoves and gas cylinders, fridges, mattresses, and sheets on Wednesday.

Telecommunications provider, Digicel, whose principal shareholder, Denis O’Brien, has pledged a new stove and fridge to each person who lost these appliances in the disaster, donated the stoves, fridges, and mattresses.

Fuel supplier, Rubis, provided the residents with gas cylinders and regulators, while Courts, from which Digicel bought the appliances distributed on Wednesday, gave each resident a voucher for a free refill of their LPG cylinders.

Carlos James, who hopes to be the Unity Labour Party’s candidate for North Leeward in the next general elections, supplied residents of the Spring Village emergency shelter with bed sheets, a result of a joint effort, with businessman Faiz Moussa.

Sean Latty, manager of Digicel St. Vincent, said that his company is buying the appliances from local suppliers who have them in stock.

Last week, appliances were bought from Singer, while those distributed in Spring Village were purchased from Courts.

“We keep going, until everybody who has a need has been supplied with a fridge, stove, and mattress as needed,” he said in reference to the disaster victims.

Latty said people are appreciative of the effort. He said a man told him in Heritage Sq., Kingstown that a relative had received a stove and was very appreciative.

“Before they had to supply that [relative] with stuff, but now they have gotten a level of independence and the reliance on others is actually less.

“So, just hearing that and seeing that made me feel even more that this is something that is well deserved and is something that will go a far way in helping people who have lost [a lot]. What we are putting back in people lives and people’s homes are the basic things that can make them more independent and self-reliant,” Latty further told I-Witness News.

Latty said Digicel’s corporate image has been boosted by the donation.

“That goes without saying. The short answer is yes. It has,” he told I-Witness News.

Meanwhile, James told reporters that he realized that appliances and mattresses were being donated but not sheets.

“So, thanks to Faiz Moussa and myself, we came together and collected some [sheets]. Some will be delivered today and we will be coming back to deliver to other shelters. The shelter in Spring Village will benefit today, and the shelters in Rose Bank and in Fitz Hughes will benefit on the next delivery to North Leeward,” James said.

Rita Charles, whose house was flooded out and much of its contents destroyed, was among the recipients of fridges, stoves, and mattresses.

Charles said she lost three mattresses as a result of the flood, and on Wednesday morning, for yet another day since Christmas Eve, breakfast for her household of five children and two grandchildren, was made using firewood.

“Me glad fuh ‘e stove because ah coalpot and wood me ah cook pon all now,” she told I-witness News.