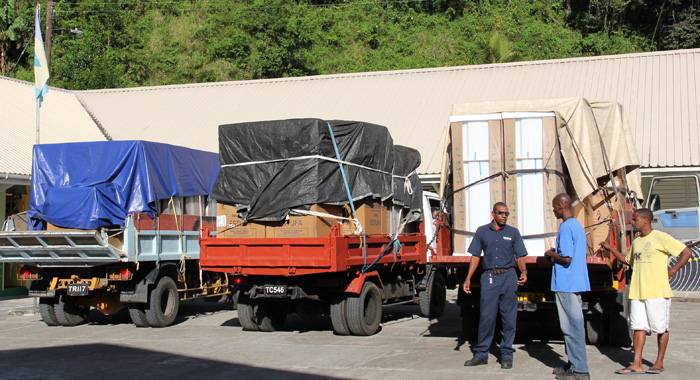 Trucks carrying fridges and stoves for disaster victims arrive at the Spring Village Primary School on Wednesday. NEMO says it has taken steps to prevent persons from claiming the same items more than once. (IWN photo)

The National Emergency management Organisation (NEMO) says it has taken steps to prevent persons from receiving replacement fridges, stoves, or mattresses more than once, as has happened in Buccament Bay.

“We are learning from the first process [and] whatever teething issues there might have been,” Howie Prince, director of NEMO, told I-Witness News in Spring Village on Wednesday, where persons affected by the Christmas Eve trough system received fridges, stoves, mattresses, and bed sheets as part of the on-going relief effort.

“One of the things that we made sure we stopped from happening today, was that there were people who were at the shelters who were also receiving mattresses and stoves and fridges at Buccament,” Prince said.

“When people tell you that some of the people received three or four mattresses before, they got them at the shelter. It didn’t mean that NEMO gave them the four or five mattresses. People who go to the shelters, businesses, other people, gave it to them. We can’t stop that.

“But the villagers are watching and they are seeing what everybody gets. It’s a very transparent and open situation in terms of a village. A village has eyes and ears that you don’t know of,” he further said.

Last week, two villagers told I-Witness News in Buccament Bay that multiple members of the same households had received appliances and mattresses and others who were not affected by the flood, claimed they had been and also received the relief items.

Prince said that NEMO has “caught on”.

“It happened because that particular family was still in a shelter and so the people, when the name came up for mattresses again, then they were receiving additional to what they got,” he explained.

“So, that has taught us that we are not doing distribution to people in shelter here. We will keep their things until such time that they are relocated. They will get it. We will keep it in a safe place for them so that when they move back into their homes, then these will be provided for them,” Prince said.

Prince also said that based on the lessons learnt from the first distribution exercise, an inquiry/complaints desk was also set up in Spring Village.

“When we went there (Buccament Bay) the first time, we didn’t have that. So I was the lone complaint desk. We made sure that didn’t happen this time. We brought our full complaint desk, so that if your situation was not dealt with, you come across quietly, tell us what has happened, we take the information, research it, we compare it against whatever database we have, and, once we authenticate, you are entitled, you lost your fridge and your stove, you will get it another time,” Prince told I-Witness News.

He said there have been cases where persons had not reported their loss to NEMO but were expecting to receive replacement appliances and mattresses.

He said that in some instances, they persons were not at home when assessors visited, while others had abandoned their properties.

“There are times when you just can’t find people to collect the information as needed. What people have to do is come back to us, to report that you see fridges being shared out and you didn’t get one. Why? We will try to answer that question and we will make sure that as long as your are supposed to get one, based on the report, that you get one in a few days, sometime down the road,” Prince said.

“If you report it on the radio station, we don’t get it. You can call any number of radio stations as many times as you want. It has not been reported to NEMO. We have a process for taking information. Right now, there are people who are sitting there with all the requisite forms that are necessary to capture even the social data that is necessary to complete this process,” Prince said.

He emphasised that the process is an on-going one. “It is a process where we have to continue to carry out the assessment. The assessment changes, people’s situation change, and we have to document that, almost on a day-by-day basis.”

Prince said that while NEMO continually prepared for disaster, a real disaster tests the situation.

“It is continuing to allow, to build the system,” he said.

9 replies on “NEMO stamping out exploitation of disaster relief distribution”