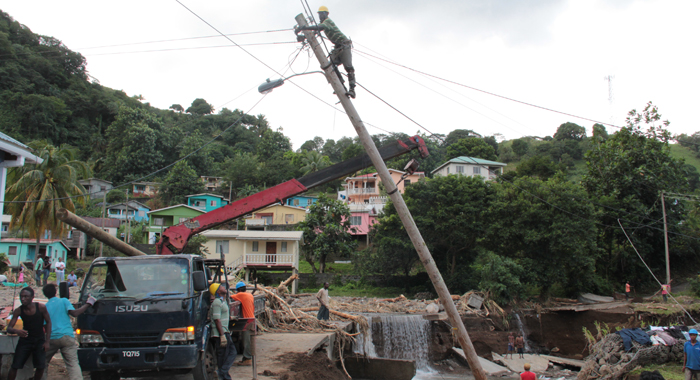 A worker repairs a damaged pole in North Leeward after the December 2013 floods. (iWN photo)

Consumers will not be asked to pay the increased fuel surcharge resulting from lower electricity generation by VINLEC’s hydro power plants.

Chief Executive Officer of VINLEC, Thornley Myers, further said that the higher fuel surcharge is not to help VINLEC repair damage to its hydropower plants during the passage of the trough system on Christmas Eve.

VINLEC’s five hydropower plants were damaged during the storm, and consumers saw on their January bill a 7-cent, month-on-month increase per unit in the fuel surcharge.

There was much public outcry after the bills were issued in January and VINLEC subsequently held a press conference explaining that consumers will see a higher fuel surcharge on their bills during the year or so that it will take to repair all the hydro power plants.

At another press conference last week, Myers clarified the reasons for the higher fuel surcharge, after comments in the media that the increase was to help the company fund the repairs.

“VINLEC will not and cannot use monies received from the fuel surcharge to do repairs on its facilities.”

Myers said that VINLEC spent just over EC$72 million on fuel and the hydro plants saved the company over EC$13.7 million in fuel last year.

“Clearly, you can see … what is the impact of the absence of hydro on our fuel surcharge, because the money we collect goes directly to the payment of fuel used for the generation of electricity.

“That has always been so, it is so today, and I believe for the foreseeable future, that’s how it will be. … None of that money remains with VINLEC. VINLEC cannot consider it revenue to be used for other operational activities,” he said.

He, however, said that in the face of the possibility of minimal use of hydro facilities this year,

VINLEC’s directors met and the company has outlined the difficulties to be confronted because of a loss of hydro facilities.

“In other words, VINLEC, from its own resources, is going to pay for the fuel that would have otherwise been associated to the generation of electricity from our hydro plants,” Myers said.

He said that based on the production of its hydro plants last year, the company will assess monthly how much fuel would have been saved had the plants been in operation this year.

“In other words, VINLEC is going to ensure that due to the lack of the hydro plants, the customers do not feel the impact of increasing fuel surcharge,” Myers said.

“It is a cost that this company will have to bare, it’s part of the cost of doing business,” Myers said.

“Clearly, it will impact us in one way or another, but we will make sure that this impact doesn’t reach our customers. In other words, we don’t want anyone to say that VINLEC is spending its money now to get $8 million to pay for the fuel, but VINLEC will recover it at some point in time from our customers.

“That’s not what this is about. We are going to find the resources to take the cost of the fuel that we are going to use as a result of not having the hydro facilities…

Myers further said that the largest hydro plant, in Cumberland, was put back into service on Jan. 24 and the one in South Rivers should be online this month.

He said the company would do whatever is possible to get hydro plants up and running.