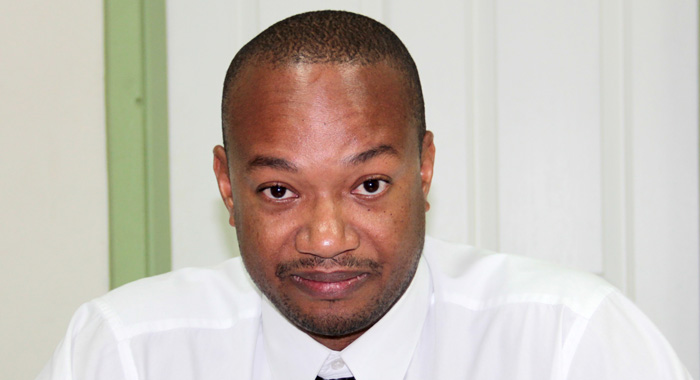 Grenville Williams, seen in this 2014 iWN photo, when he was director of the FIU, said on Monday that the crime-fighting unit does not comment on its investigations — real or perceived.

Lawyer Grenville Williams, who is bidding to be the Unity Labour Party’s candidate for South Leeward in the next general elections, says he is confident that his wife will support his candidacy.

Williams, who is also head of the Financial Intelligence Unit, is married to Shafia London, daughter of E.G. Lynch, a former host of the opposition New Democratic Party’s (NDP)“New Times” radio programme.

Lynch, who no longer hosts the programme because of ill health, was a rabid critic of the Ralph Gonsalves headed ULP government.

When asked if his wife supports his candidacy bid, Williams told I-Witness News, “Let me answer that question this way: every individual has a right to self determination. If I am the father of the prime minister of St. Vincent and the Grenadines, whether he is for NDP or ULP, I have a right to determine which party I support. I may support one or the other or I may support none. For me, in St. Vincent, we must get to the point where we appreciate that persons are individuals, most of them are capable of thinking critically and therefore making up their own minds who they support.”

Williams further said that his relationship with his wife is not based his politics.

“The fact that I married the daughter of E.G. Lynch was not a political decision. This was a decision based on the love of two persons. Politics had nothing to do with it, but, I do believe in the saying that a house divided cannot stand, and therefore, if I am a candidate for the ULP, I have no doubt in my mind that my wife will strongly support any decision I make, because we operate as a family unit.

“… as a people, we must exercise, as I said, critical thinking. Simply because a person’s father, a person’s wife, any relation is affiliated with any organisation, any movement, it doesn’t mean that that individual cannot appreciate someone else who has a different view and it does not mean that if your father was a spokesperson of a party that you agree with the policies and the views of that party.

“And the wife that I have is a very strong woman, a very independent woman. Most people in St. Vincent would know that. A woman who would stand up for her rights, generally, and a woman, I believe who will be persuaded by principles, by policies; and if those polices in her household, by the fact that her husband is supporting the ULP, then I believe she will support those policies as well.”

London, who is Regional Commercial Manager of St. Vincent Brewery Ltd., is a former executive director of the Chamber of Industry and Commerce and a national scholar.

Williams spoke to I-Witness News one day before Monica Thomas, wife of NDP candidate for South Central Windward, Addison “Bash” Thomas, in an unrelated interview, said she no longer supports her husband’s candidacy, because of personal reasons.

(Read also: Wife of NDP candidate says she is a ULP supporter)

3 replies on “ULP hopeful confident wife will support his candidacy”