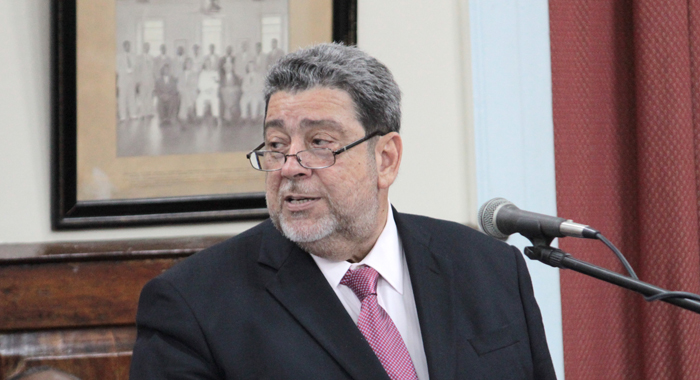 Prime Minister Ralph Gonsalves has commented on the gravity of the actions of Edson Augustus, who was recalled from his post as deputy consul general in New York because he offered to help persons in the United States to secure U.S. Permanent Resident Cards — “Green Cards”.

“Can you imagine an American citizen in St. Vincent and the Grenadines who is not, quote-unquote, legal in the country for whatever reason, or the consul general or some other officer from the embassy calls me or gets in touch with any of the immigration persons to help with the regularization of the status of such a person? That is wholly improper,” Gonsalves told a Trinidad-based  journalist on the weekend.

Kingstown on Feb. 7 recalled Augustus after it received confirmation that he was acting outside the scope of his employment, and Minister of Foreign Affairs, Sen. Camillo Gonsalves told I-Witness News one week later that the diplomat was recalled for offering, for a fee, to help Vincentians in New York to obtain Green Cards.

“This action, whether the action on the part of the Deputy Consul General was for a personal fee or not, it is outside of the scope of his legitimate employment activities and I didn’t want any questions to be raised about his acting in the way in which he has acted,” Prime Minister Gonsalves told the journalist on the weekend.

“Now you get, in a competitive political world, a straightforward matter like that takes on a different colouration, that he was selling passports,” the Prime Minister said.

He added that Vincentian passports are not issued at any of the country’s consulate, although applications can be made there.

Gonsalves said his government discontinued the issuing of passports at its consulates as part of its regime of tightening up the travel document.

The Prime Minister said there were criticisms in the Vincentian diaspora as to why the government was making it more difficult for its citizens to obtain passports.

“Isn’t it strange that the same critics then are now who turn around and invent this matter that he was dealing unlawfully with our passports. That’s just not possible. The process is very clear,” Gonsalves said.

(Read also: Immigration chief says all passports issued to SVG can be accounted for)

“Up to Thursday, when I left home, however, he had not returned to St. Vincent and the Grenadines. If you are recalled and you don’t come back, there are rules, which may suggest that you may have abandoned your office.

“So all those are not matters within the preserve of a politician. Those are matters under the law of the country where the permanent secretary and the chief personnel office will address those questions,” Gonsalves said.