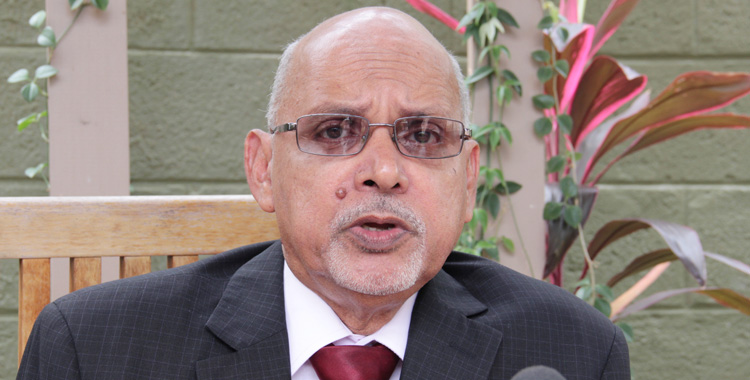 Clive Dottin, the Trinidadian Seventh-day Adventist (SDA) pastor who in 2011 recommended to Prime Minister Ralph Gonsalves that former SDA pastor, Edson Augustus be appointed a diplomat, says he is shocked by the developments leading up to Augustus’ recall on Feb. 7.

He told reporters in St. Vincent on Thursday that the development has traumatised the Seventh-day Adventists locally and across the region.

Dottin further said that while the development “does send a kind of cautionary note in terms of future appointments”, the government should not rule out religious leaders as future diplomats.

Augustus was recalled from his post as Deputy Consul General at the St. Vincent and the Grenadines (SVG) Consulate in New York, after he admitted to Prime Minister Ralph Gonsalves that he took money from persons and promised to help them to source U.S. Permanent Resident Cards – “Green Cards”.

The government said that the actions of Augustus, who has since been fired, was outside of the scope of his employment and “inimical” to the interest of the consulate, and the government and people of SVG.

In justifying the May 2011 appointment of Augustus, three months after he resigned as an SDA pastor, Gonsalves told journalists on Tuesday that he had consulted a Trinidad pastor who is a newspaper columnist and former senator, a description that fits Dottin. Gonsalves, however, did not name the person.

Dottin, who is in SVG for a religious conference, told journalists on Thursday that Gonsalves did consult him about the appointment of Augustus as a diplomat.

Dottin, who told reporters that having read reports on the Internet, he is “aware of what allegedly had taken place” regarding the recall of Augustus, said that when consulted three years ago, he supported the appointment because he felt that Augustus would make a good diplomat.

“I felt so. In all my heart, I felt so. Knowing him and the kind of community work he was involved in, when the Prime Minister spoke to me, I thought he was a good choice,” Dottin said.

He said that while he does not have all the fact surround the recall, from what he has heard, he is “disappointed”.

“In fact, I must tell you, when I heard it in Trinidad, I was shocked. I should say almost traumatised. And I know I was coming here and I am glad that you asked me the question because I feel truth is the best weapon in this search for peace and harmony. And I did speak to the Prime Minister,” Dottin said.

Asked how he came to recommend Augustus for a diplomatic post, Dotting said, “My knowledge of him as a worker in the field, when I launched the mega mission programme, in terms of community work and community development.

“… My opinion of him was that he was a hard worker and was someone who could really represent the country in terms of people who were oppressed and needed help. So when I was asked by the Prime Minister, I was in support of it. I am sorry about the turn of events. I mean I am hoping that it is still not true.”

Augustus returned to St. Vincent on Monday, 10 days after his recall, and left for Trinidad that same day after being debriefed by the Ministry of Foreign Affairs.

Dottin, who arrived in St. Vincent Wednesday morning, said he saw Augustus briefly at the airport in Trinidad.

Dottin, who serves on the Caribbean Union Conference of SDAs, further said he was aware that Augustus had parted ways with the clergy of the SDA Church at the time of the diplomatic appointment.

“… and whatever the reason for that, I still felt that he was made a good ambassador for the country, in terms of his interest in people, not just Adventists, because I saw him working for people of all areas.”

Dottin said that members from other religious groups in Trinidad contacted him asking that he support Augustus’ diplomatic appointment.

There have been certain allegations against Augustus which were said to have led to him longer being a pastor as of February 2011.

Asked if Augustus was asked to resign, Dottin said, “… what I recall is that he resigned from the mission and it was accepted by the Caribbean Conference.”

Regarding the reasons for the resignation, Dottin said, “I think there were conflicts.

“I don’t have the full story but I think there were certain situations here that was led to his resignations.

“What I can tell you is that there were conflicts. I think there were some disagreements between the local body here. I am not licensed to give out that, because I believe that the local body would be the one empowered to make a statement on that.”

But the local SDA Mission seems unwilling to talk about the development and have not returned several calls by I-Witness News to its headquarters.

“I don’t want to come here judge, jury and executioner on the local body here. I would say, and I am speaking for myself now, I think it is an extremely traumatic period for the church locally here and also for us regionally,” Dottin said of the impact of the scandal on the church.

“Perhaps some of us may be more open than others, but we are going through a rough time.”

Dottin said that while the conference and the developments surrounding Augustus are “mutually excusive”, he came to St. Vincent “with a great concern, … seeing that this programme … is timed when this thing has become not just a religious issue but a political issue.

“I read on the Internet where the opposition is calling for all kinds of investigations and stuff. I don’t want to get into the politics of the country, but it must be a tough time here, and also for the community.”

Dottin, however, said that the development should not affect how people look at pastors becoming diplomats.

“I don’t think I am infallible also as a pastor. I think it must make us more sympathetic when other pastors of other religious groups find themselves in a deep crisis. If you belong to an organisation and you are very critical when other leaders fall into trouble, then it must be shell shocking when it comes to you,” he said.

He said the development teaches everyone to be “empathetic to all those who fall from other religious groups.

“But it think it does send a kind of cautionary note in terms of future appointments. But that is dangerous, because there are people, I am sure, who are pastors, who could always be good ambassadors. And I think I want to emphasise that. I don’t think the government should say, ‘Well, we will never go in that direction again.’ I think you can’t say one size fits all. But, I am telling you, it is a traumatic experience for us,” Dottin said.