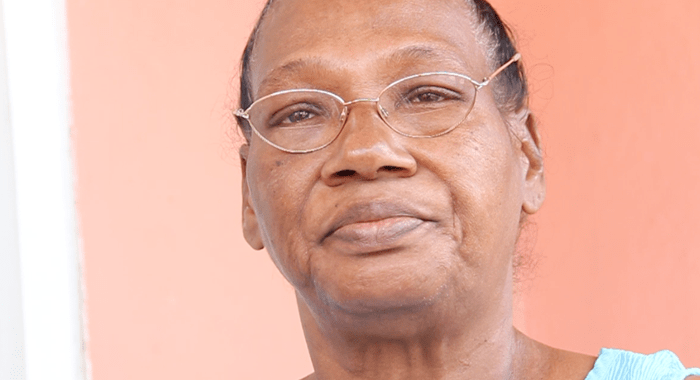 Milleen Russell says she was not assisted because she does not support the ruling party. (IWN image)

The state-owned Housing and Land Development Corporation (HLDC) used materials bought by the central government under the Hurricane Tomas relief programme in 2010 to build low-income houses, even as some citizens whose homes were damaged in the storm are yet to receive any assistance.

And Prime Minister Ralph Gonsalves said last week that his government is taking steps to ensure that this is not repeated.

“We are strengthening the capacity down at HLDC,” he told a press conference, last week, adding that he has asked that the acting Deputy Accountant General, be assigned to HLDC.

Gonsalves said that a “hybrid mechanism”, involving the HLDC and the central government, will conduct the housing programme.

“It is not directly under the Housing and Land Development Corporation but you are using the institution to effect certain things.

“I don’t want that with … this special project. Resources are provided separately for the Low-Income Housing Project, so that this is channeled in a direct manner to this particular project,” said Gonsalves, who is also Minister of Finance.

The steps are being taken at a time when Gonsalves acknowledged that some persons’ situations “were not addressed fully or at all” after Hurricane Tomas in 2010.

Back then, the government bought EC$6 million in building materials specifically to repair houses damaged by the storm.

Some of the persons who have not received assistance have claimed political discrimination, a charge that the government has denied.

Leader of the Opposition, Arnhim Eustace, leveled such an accusation in Parliament in January while debating the 2014 Budget.

Gonsalves, in his response, debunked some of Eustace’s claims and read from documents showing that some of the persons mentioned by Eustace did receive disaster relief.

However, among the persons that Gonsalves said did not receive relief was Albert and Millene Russell, a couple from Georgetown that had a business adjoining their family home.

The Russell’s property was damaged during the passage of Hurricane Tomas in October 2010, and again during the April 2011 floods.

Gonsalves told Parliament in January that while Mrs. Russell is a “local leader” in the NDP, the failure of his government to help her had nothing to do with politics.

Mr. Russell “has always been my friend and I have always respected Mrs. Russell even though she was a local leader in the NDP,” he told lawmakers.

In the floods of April 2011, both their shop and house was severely damaged, Gonsalves said, but added that they are not the only persons who did not receive assistance.

He noted, Gonsalves further said, that the property of the Russell’s son-in-law, Raffy Crichton, located across the river from the Russells, was damaged terribly, and while Crichton is one of Gonsalves’ staunch supporters, he, too, got no assistance from the government.

The Prime Minister said that to the best of his knowledge, the couple has two other houses, a claim that Mrs. Russell denied, and which I-Witness News was unable to independently verify.

Gonsalves said that one of the weaknesses of the relief efforts after both Hurricane Tomas and the April floods was that there was no provision made to assist the small businesses.

“The point I am making, Mr. Speaker, there was no discrimination against Mr. and Mrs. Russell.”

But even as the Prime Minister said that the non-assistance of small businesses was a failing of his government, the Russells did not receive assistance to repair even the part of the building within which their house is located.

Mrs. Russell told I-Witness News that she reported her loss to NEMO, which gave her two tarpaulins, which have since disintegrated.

She said she believes that she did not receive assistance simply because of her politics.

“I saw people who got damage, I should say, because they are ULP supporters all of them got their house built back, but I am the only one in the whole area here that didn’t get anything,” Mrs. Russell told I-Witness News.

“Ralph was coming at me all the time and asking me to support him and I told him plainly no, I can’t,” she further said.

Mrs. Russell said that Gonsalves taught her in school, but she “will never support him”.

She said she won’t say why, but added, “what a man preaches that’s what he means.

“If you are a teacher and you preach something, don’t you think the children are listening?”

She, however, declined to say what Gonsalves reportedly “preached”.

Meanwhile, Mr. Russell declined to comment, saying, “I don’t have no commess to make.”

Gonsalves has said that Cabinet has agreed that a fund be set up to help small businesses affected by disaster.

He, however, said that the proper thing to do is to insure a business of the size that the Russells operated.