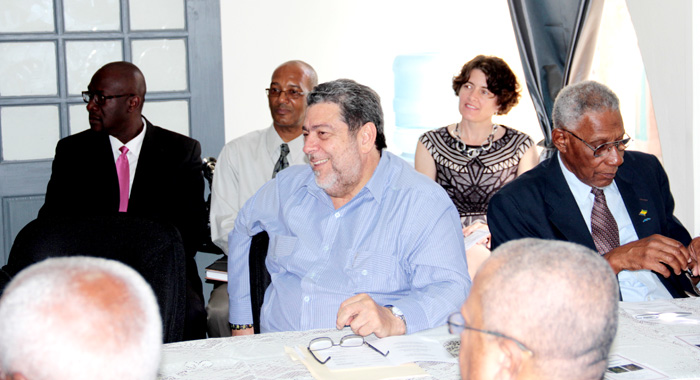 Prime Minister Dr. Ralph Gonsalves and other officials at the launch of the e-passport on Tuesday, March 4, 2014. (IWN photo)

The government, on Tuesday, launched an e-passport for Vincentians, hailing it as even more secure than the machine-readable travel document launched in 2005.

“The E-passport has a lot of enhanced security features — tamper-proof, with a chip embedded in the page, storing data. And in these ways and others, we are keeping ahead of the criminal elements who want to abuse our passports,” Prime Minister Ralph Gonsalves said at the launch.

Gonsalves, who, as Minister of National Security, is responsible for immigration matters, said that when SVG introduced its machine-readable passport on June 1, 2005, it was 10 years ahead of the internationally agreed deadline.

“And now, we are going beyond the machine-readable passport to go and tighten the security further,” he said, noting that SVG is the second country in the Caribbean Community — after St. Kitts and Nevis — to introduce the e-passport.

He said the issuance of the e-passport is in keeping with the International Civil Aviation Organisation’s (ICAO) security resolution 1624 of 2005, which, he said, seeks to enhance the security of the nation’s travel documents.

“We, as citizens of this country, we should be very proud of this achievement, that we have the additional assurance that we have a very secure travel document in line with the highest international standard established by the International Civil Aviation Organization. That’s what we are doing here today. That’s what we did in 2005 and we are lifting the game even higher,” Gonsalves told a gathering of high-ranking state officials.

Gonsalves said that since SVG switched to machine-readable passports in 2005, there have been no reports of tampering with the document.

“And the issuance of our e-passport will make it even more challenging for those elements, including criminal elements, who want to breach the security of our passport,” he said.

He, however, said, that all over the world there is occasionally “somebody getting away with a source document — some fraud.

“What we have to do is to have zero tolerance for that and try to keep the number to zero. But because you may find occasionally a case, that doesn’t invalidate the safety and security of the system as a whole,” Gonsalves said.

In Canada, the prices will be CAD$145 for adults and CAD$75 for children. In the United States, they are US$150 and US$80 and 75 pounds and 40 pounds respectively, in the United Kingdom.

Persons who have applied while the old prices were applicable would not be asked to pay the difference.

The initial set of passports will have 32 pages. However, a 52-page passport will also be made available.

The ordinary passport will be green, the official, blue, and the diplomatic, burgundy.

The system for the production of the e-passport and a three-year contract with Canadian Bank Note cost the government US$3.4 million.