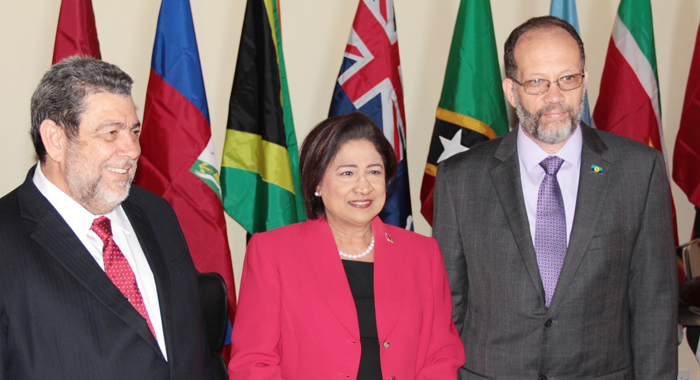 The 25th inter-sessional meeting of Heads of Government of CARICOM got underway on Monday with incoming chairman, Prime minister of St. Vincent and the Grenadines, Ralph Gonsalves, responding to criticisms of the 41-year-old regional.

“Frequently, CARICOM is lambasted for its failure or refusal to implement the decisions of its treaty-based institutions. Invariably, the CARICOM Secretariat is excoriated for this implementation deficit,” he said.

He said that the Secretariat is not CARICOM, although it is a central administrative instrument of thee regional bloc.

“… it possesses (CARICOM Secretariat) no authority to compel enforcement of decisions of the various Councils of Ministers and the Heads of State and Government Conference.

“In the absence of an Executive CARICOM Commission, buttressed by the requisite constitutional or legal authority, the central responsibility for the implementation of CARICOM’s decisions rests with the governments of the individual nation-states.

“Thus, each government is enjoined in its responsibility, nay its solemn obligation, to put appropriate institutional arrangements in its natural executive and administrative apparatuses to facilitate the speedy and efficacious implementation of CARICOM’s decisions,” Gonsalves said.

He said CARICOM has accomplished much, but added, “Still, there is a great deal left to be done to realise the full fruition of the Revised Treaty of Chaguaramas.

“It is the frustrating, unfulfilled potential of CARICOM which prompts stinging critiques, including a justifiable sense in some quarters that this regional body is unequally yoked and thus allocates or distributes its benefits too unevenly.

He, however, said the “disillusionment of many of the critics stems, in large measure nevertheless, from their illusions about CARICOM’s nature and its institutional arrangements.

“So, let us begin by stating what CARICOM is not.

“CARICOM is not a central government for a bundle of disparate territories. It is not a unitary state; it is not a federation; it is not even a confederation. The Revised Treaty of Chaguaramas conceives it as a community of sovereign states. Its centre has been deliberately designed as a weak superstructure which constantly gropes for consensus. That is what the political market can bear; that is the reality which the broad citizenry in the Community has endorsed,” he said.