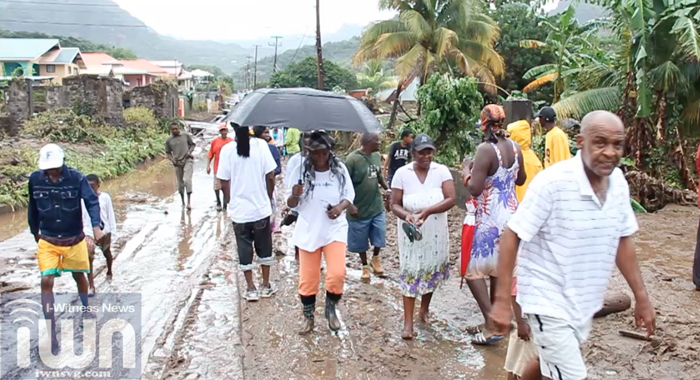 Minister of Works, Sen. Julian Francis says the clean up after the Christmas floods is incomplete. (IWN image)

Minister of Works, Sen. Julian Francis, has urged the media to continue to highlight the on-going recovery after the Christmas floods, which has left EC$330 million dollar in damage across the country.

“It is not over,” he told a joint press conference with the Roads, Bridges and General Services Authority (BRAGSA) on Tuesday, during which he updated the media on the on-going recovery and clean up.

Torrential rain from a trough system on Christmas Eve triggered flash floods and landslides that have left nine people dead and three missing, in addition to EC$330 million in damage to housing, public infrastructure, and agriculture.

Francis, who is co-ordinating the distribution of appliances and mattresses as part of the recovery effort, noted that it is not yet three months since the storm, adding that there are “still many “suffering people out there.

“People who are suffering, people who … having a hard time putting their lives back together. … Those of us who live in the unaffected areas, after traffic started to flow and everything else, we figured it is over,” he said.

“The repairs … are on-going … the work is not done. And I want particularly the print media, and the electronic media to give before and after shots as to where we are.

“Please, let the people know — remember what happened on Christmas Eve, and, six days short of three months we are still at it … but it is not as intense as it was then, but it is still on-going,” the works minister further said.

He said BRAGSA has been employing teams to clean the houses of yards of residents affected by the flood.

“BRAGSA will not stop putting gangs in until all these people’s homes and backyards are cleaned up. The money will come; I believe in that. It is not all here, so far we have been getting what we ask for…

He said that BRAGSA, a state-owned firm responsible for the maintenance of public infrastructure, “has been at it since Christmas Day”.

BRAGSA’s work has included cleaning landslides, construction of temporary pedestrian bridges over rivers where the permanent bridges were destroyed, and the de-silting of rivers.

Francis spoke of the agency’s “hard work”, adding that it has had to clean up after the storm while performing its everyday duties.

He said that a further EC$2 million for the clean up and repair is expected to be disbursed this week.

“I don’t want us to forget what we have out there. It is not over. I don’t the media to back off on it, I want you to challenge me on it…” Francis said, suggesting that the media can question the pace and prioritising of work.