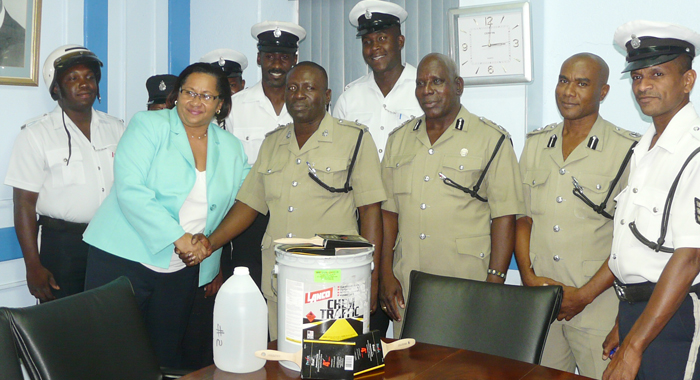 Manager of St. Vincent Cooperative Bank Laverne Velox, donates paint to Superintendent Kenneth John, head of the Traffic Department, while Commissioner of Police Michael Charles and other officers look on.

St. Vincent Cooperative Bank, also known as “Penny Bank”, on Tuesday donated 20 gallons of paint, 10 gallons of thinners, and paintbrushes to the Traffic Department of the Royal St. Vincent and the Grenadines Police Force to continue its road marking programme.

Velox said St. Vincent Cooperative Bank has been making donations of paint to the police over the past five years and the contributions have grown from two gallons of paint to 20 gallons. She said it is a pleasure to present the yellow and white paints along with the other items, valued EC$3,000, because the Bank recognizes that the police have needs.

“We don’t want accidents to happen because people don’t know where the markings are. We want you to execute your duties in the most efficient way,” Velox said.

She said the bank’s relationship with the police in the provision of paint started five years ago when John had members of the Traffic Department paint keep clear markings just outside the bank.

John said he is grateful for the donation because it allows the team of police officers currently engaged in painting the road markings to progress seamlessly. He said the department had used up its white paint recently, so the timing of the donation is quite impeccable.

He also called on other business organizations to join the St. Vincent Cooperative Bank in supporting the police.

Meanwhile, Charles said the bank’s gesture is timely and expressed thanks to its management.