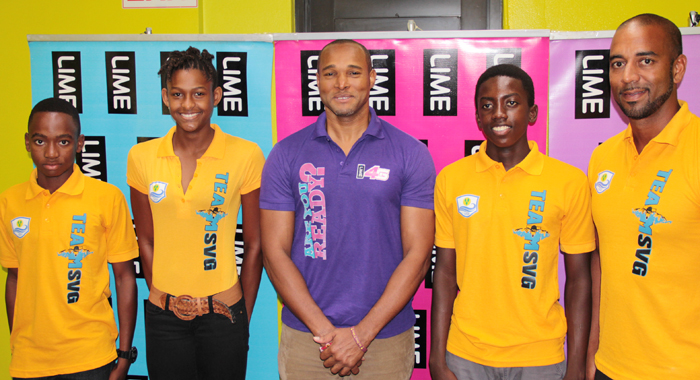 Kyle Dougan, coach of the St. Vincent and the Grenadines swimming team at the 43rd CARIFTA Games, says he is expecting the athlete to perform well and return with gold medals when they compete in Aruba later this week.

Dougan describes Nikolas Sylvester, Shné Joachim, and Shane Cadogan as “three very talented and strong swimmers that have potential to bring back some gold medal for St. Vincent.

“I am hoping that Shné, with her current performance, she does what expected of her and makes the final and swims as she should,” he said at a press conference last week, ahead of the games.

The three athletes were among the team that represented SVG at the   15th annual RHAC Championships in St. Lucia earlier this month.

They returned SVG’s best ever results at a major swim meet.

Sylvester was champion in 13 to 14 boys category. He won 8 gold medals, 7 silver medals and 1 bronze medal.

Sylvester also broke five national St Lucia records, several of which had stood for more than 10 years, and also placed second in the Sprint challenge.

Cadogan was champion in the 11 to 12 year-old boys category. He bagged 3 gold medals, 6 silver medals and 6 bronze medals. He also broke one national St Lucia record and one meet record.

Dougan noted the potential of the athletes, but added that they are young and should have fun at the CARIFTA Games.

“So, at this stage, as much as we are applying the pressure, it’s still very much about having fun and enjoying the sport. So, my job as a coach is to develop the swimmers so they reach their peak at the right stage of life.

The team’s participation in the games is being supported by telecommunications provider, LIME.