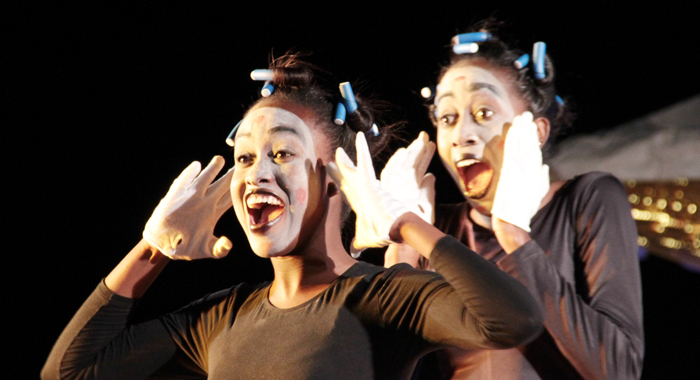 Two mimes perform at the launch of Gospel Fest in 2014. (IWN photo)

Chairman of the St. Vincent and the Grenadines Gospel Fest Committee Michael Peters has thanked telecommunications services provider Digicel for once again supporting the annual festival.

Peters said that Digicel has been supporting the festival since it began in 2003 and this year has been no different with the company giving money to ensure the success of the festival.

“Digicel was the first corporate sponsor in 2003 and more than any other company, they are responsible for the development and growth of Gospel Fest, as their contribution has reached amounts like $20,000 in one year alone,” Peters said.

“We are very grateful for the support and very appreciative. It must also be noted that over the years, Digicel’s name has become synonymous with Gospel Fest”.

This year’s Gospel Fest began on April 13 and ends this Sunday, April 27, with the SVG National Gospel Showcase at Victoria Park.

Peters collected the sponsorship cheque for the event on Friday April 11th during a short ceremony at Digicel’s Corporate Office located in the Lewis Building on James Street, Kingstown.

“Gospel Fest is about prayers and thanksgiving so we are extremely supportive of events that promote and speaks to positivity,” Cupid said.