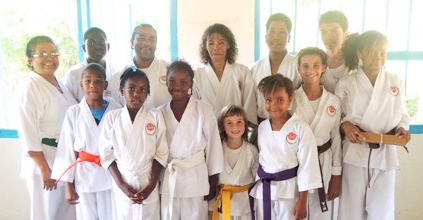 A group of nine students from Bequia Kiai Karate School, forming part of the International Shotokan Karate Federation, travelled to St Vincent this month to take their latest examinations.

They all passed their grading and were presented with certificates and their new belts at an informal presentation at the dojo in Lower Bay, Bequia last weekend.

The group included the youngest ever karate pupil of the school, 5-year-old Ivo Rands, who gained his yellow belt alongside his mother, Bec Horner.

“Ivo has worked very hard to be ready to take his first belt. It is not easy for a 5-year-old to concentrate, but through karate he has learned how to not give up and has gained the confidence to believe he can do it. I am so proud of him and he is so pleased to have got there, he has such of feeling of accomplishment,” Bec Horner said

Another family group, mother and daughter Elena and Jamilia Glynn gained their purple belts, trying to catch up with older sister, Chelsea, who is set to take her black belt next — the equivalent of a bachelor’s Degree at the age of only 13.

Teenager Canyon Duncan gained his 1st Kyu brown belt enabling him to go for his black belt in a year’s time.

Bequia Kiai Karate School is headed by Sensei Selwyn Gibson of St Vincent, who is a highly respected 3rd Dan.