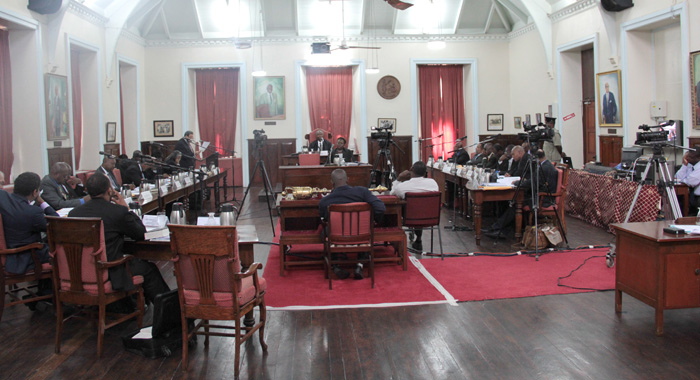 The parliamentary opposition has made it clear that it will not support proposed changes to the Passport Act unless the government clearly outlines a timeframe for passports that it is seeking to validate.

Prime Minister Ralph Gonsalves tabled the bill in Parliament on Tuesday and defended his administration against allegations that it is trying to exonerate corrupt practices at the nation’s consulate in New York.

“This is a straightforward bill for the better administration of the passport and for the validation of certain fees, and the fees being the scheduled fees. It has absolutely nothing to do with anything happening at the New York Consulate or anywhere else,” said Gonsalves, who has ministerial responsibilities for passports and legal affairs.

Gonsalves said the amendment will make valid the fees collected and passports issued since March 2014, when the government changed from five-year machine-readable passports to 10-year e-passports.

But Leader of the Opposition Arnhim Eustace raised questions about whether the government has issued any 10-year passport between 2007 and March 24, 2014.

“And if so, does this bill cover those passports? That is a fundamental question, because it goes to the heart of everything that is being said here today,” Eustace told lawmakers.

The government changed from 10-year passports to 5-year machine-readable ones in 2005.

The amendment being debated has received a lot of public attention, including a letter to the editor signed by Hans King, press secretary to Gonsalves, published in local and regional media.

Gonsalves told Parliament that he was surprised by the response to the amendment, adding that validations are common, legal, and constitutional.

“There is absolutely nothing sinister about this bill. From the time this bill came on the Order Paper, some of the wildest exaggeration, untruths and falsehood were propagated about this bill.

“I have refereed to them elsewhere as scaremongering tactics at their worst,” he said.

The Director of Audit, in a recent report on the New York Consulate, said fees in excess of those gazetted were collected for Vincentian passport, a finding that the Ministry of Foreign Affairs has disputed.

Gonsalves also said the narrative is that the bill was brought to cover-up or exonerate corruption in the issuance of passports at the New York consulate.

“When the bill came to me in draft form, I found that it was consistent with all the administrative requirements,” said Gonsalves, a lawyer.

“And for persons who are responsible to go about and scaremonger and speak falsehoods about this bill is an awful derogation of serious responsibility.

“I am a leader; I do not allow Internet crazies to lead me. Most persons on the Internet seek to inform themselves, but there are some with an agenda against this government and anything the government does. If it is good, they seek to distort it and make it bad,” he further said.

“This is to take account of the e-passport. They are the only passport which prior to the commencement of this act is going to be a 10-year passport.

“Those which are five years remain five years with their starting date and expiry date. I don’t know what is so difficult about that to understand.”

But Eustace pointed to Gonsalves’ press secretary’s letter in the media, and noted that the letter says the bill is to validate all new 10-year e-passports issued since March 2014 under the decision of Cabinet.

“That is probably the most fundamental issue that we have raised under this bill, because it refers to passport for more than 5 years, so we assume that that they are 10-year [passports], and that they were issued since March 2014,” Eustace said, and questioned whether any 10-year passports were issued after 2007 and before March 2014.

“If that were the case, should it not be indicated so that there would be no doubt as to the meaning of the clause?” he further said, adding that the government should make it clear that it is referring only to 10-year passports issued in 2014.

But Gonsalves intervened, noting that that the law says passports shall be valid for five years, provided that diplomatic and official passports may be issued for shorter periods, as the minister may determine.

“So, there could not have been a ten-year passport issued, because there was no authority for a 10 year-passport…”

“Likewise there is no authority for those issued in March 2014 until this bill is passed. It applies to that too,” Eustace retorted.

“You are making that statement and even those that have been issued since March, it is only now we are seeking to get the validation.

“So, don’t give the impression it is a holier than thou matter. We are dealing with real people and people have concerns, and when they express the concerns, you must listen too, not attack and talk about scaremongering.

“If you are not interested in bringing the whole story out, say, ‘Listen, we are covering.’ And the law must say so, for the avoidance of doubt. It has nothing to do with scaremongering. It has to do with the circumstances of our time, where our passports are being questioned left, right and centre in public discussion here in St. Vincent and the Grenadines.”

Eustace said opposition lawmakers are just as interested in the advancement of the country, the diaspora, and easier travel for Vincentians.

“I am not going to support any bill here unless it deals with this matter of March 2014 in the bill. I am making that very clear. I think that is fundamental to an understanding and making it clear to those outside who are watching us today, especially those governments where we have a significant diaspora.

“That is our concern here on this side of the House. And I want our face to be seen as clean outside there. And what is happening here today is not giving us a clean face outside. I think we should spare some time to think about this — not scoring cheap political points, but looking at the best interest of our population,” Eustace told lawmakers.