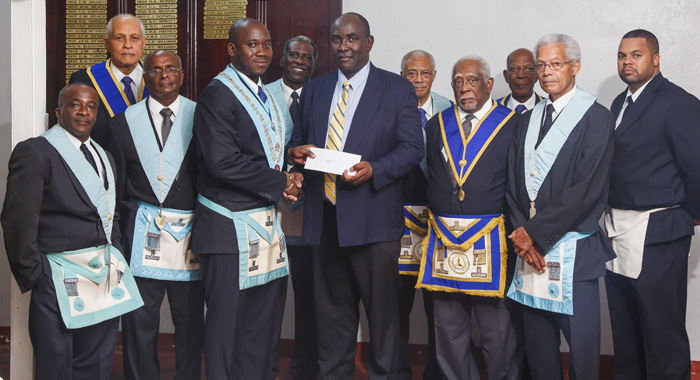 Freemasons have donate EC$20,000 to the SVG Red Cross for the December 2013 storm relief.

Freemasons in the Caribbean have donated EC$20,000 to the St. Vincent and the Grenadines Red Cross Society to assist with the relief effort after the December 2013 floods and landslides.

Nine persons died, three are missing, and EC$330 million in loss and damage was left in the wake of a trough system Christmas Eve.

The presentation took place at the Masonic Hall, Bentinck Square and was attended by members of the lodge, and representatives of the Red Cross.

Dickson explained that the District Grand Lodge of Barbados and the Eastern Caribbean in Barbados donated EC$5,000, while the Regional District Grand Masters’ Conference donated US$5,000 from the Caribbean and Western Atlantic Regional Consolidated Disaster Fund, while EC$1,600 was contributed by members of St. George Lodge.

Dickson said St. George Lodge in St. Vincent was formed in 1896, and has enjoyed 114 years of unbroken existence.

He said that Freemasonry from its inception, adopted as an important guiding principle for its members the alleviation of human suffering and distress, and that Masonic charitable donations have contributed significantly to improving the human condition in communities throughout the world including St. Vincent and the Grenadines.

He observed, however, that Freemasonry’s charitable work might not be as well known because the institution does not allow its members to raise funds for charitable causes through appeals to the public.

Dickson also spoke of Freemasonry’s former reluctance to have its members speak openly about its aims and objects and said that this has led to public misconceptions about the institution.

He said that Freemasonry was now far more inclined towards “openness.

In responding, Morgan thanked the St. George Masonic Lodge on behalf of the Red Cross Society for its initiative, and Freemasonry in the region for its donation.