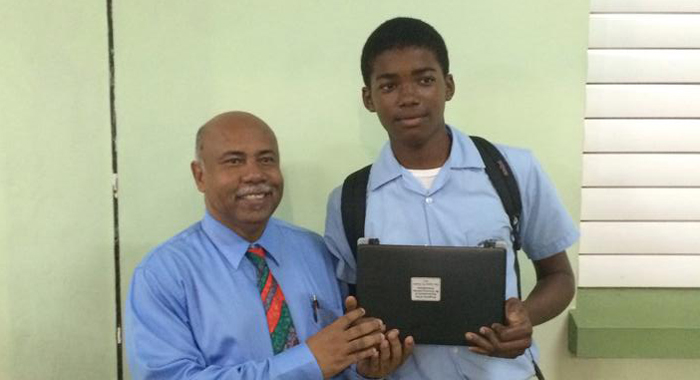 Ezra Adams and Clothesha Alexander, Form 1 students of West St. George Secondary School, were the first recipients of Acer Laptops under the “One Laptop per Student” Project.

This initiative spearheaded by the Government of St. Vincent and the Grenadines commenced on Tuesday at West. St. George Secondary, where 317 Acer laptops were distributed by officials from the Ministry of Education.

Speaking at the handing over ceremony, Area Representative, Cecil McKie thanked the ministry for selecting West St. George Secondary School as the first school under the distribution programme.

He said it couldn’t come at a better time since the School is celebrating its 10th anniversary this year.

Mckie said the Principal, staff and Students of the school were in the spotlight as they have to show the other schools that they will take care of the laptops, and use them as tools for effective learning.

Meanwhile, Minister with responsibility for information communication technology, Sen. Camillo Gonsalves, spoke of the genesis of the “One Laptop per Student” project as the brainchild of Prime Minister Ralph Gonslaves.  He said, the Government of St. Vincent and the Grenadines and UK’s largest Publishing Company, Dennis Publishing, signed a deal to provide over 12,500 laptops to supply to Secondary Schools under the “One Laptop Per Student” Project.

Gonsalves urged the students to take care of the laptops which arrived in St. Vincent early this month.

He said that the carrying bags for the laptops had just arrived at the Customs and they will be cleared and distributed soon.

The Ministry of Education has advised parents/guardian of students under the age of 18 to bring along their identification cards to sign the contract forms on behalf of their children/ward. Parents who are unable to attend are asked to send a letter of authorization to the school giving permission to another person to collect on their behalf.

The distribution programme will continue today (Wednesday) and tomorrow. The Ministry Officials will then sort, pack and prepare the other laptops to be distributed to schools in and around Kingstown and the Grenadines from July 2-4.

(Click to find out when and where laptops will be distributed)

One reply on “Gov’t begins to distribute laptops to students”