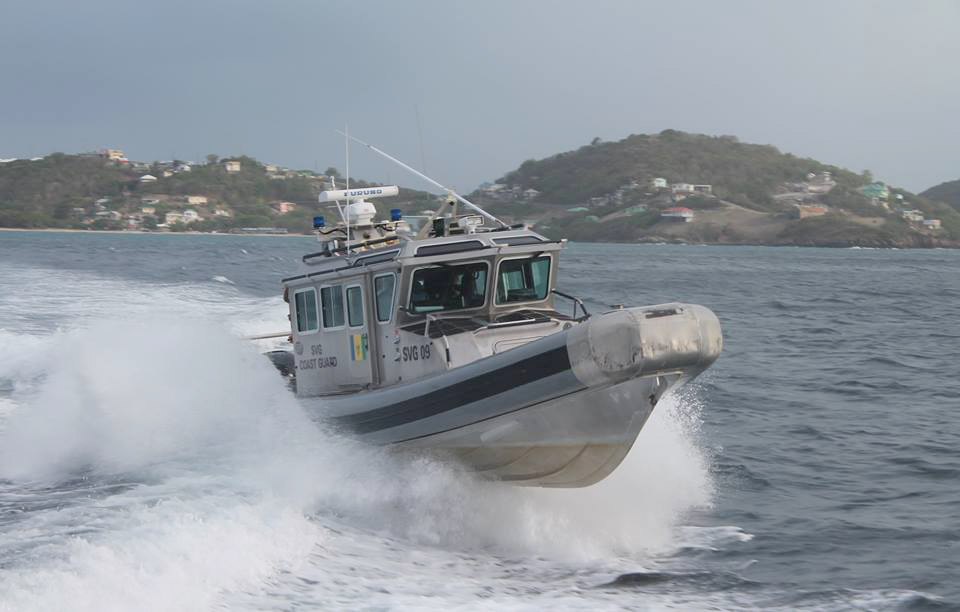 The Coast Guard sub base in Canouan, which was commissioned on Tuesday, will help to protect the “soft underbelly” of this multi-island nation, says Prime Minister Ralph Gonsalves.

The new base will also help to make less porous an area of the country that is a haven for criminals from South America, Trinidad and Grenada, Commissioner of Police Michael Charles said.

The US$2 million sub base was constructed under the U.S. Government’s Secure Seas Programme. The government of St. Vincent and the Grenadines contributed the land, which is worth EC$400,000.

It was completed last October and because operational in November.

(Scroll for link to photos of the complete ceremony)

The base is comprised of a two-storey, operational centre that has 4,500 square feet of floor space and can house 24 Coast Guard personnel; a 50 feet long pier that allows for six feet of water depth at low tide; fuel and water storage and dispensations systems; and a communications tower.

Gonsalves, who is also Minister of National Security, said the sub base is an extension of the central Coast Guard base at Calliaqua in St. Vincent, and will perform all the operations conducted at the main base.

Twelve Coast Guard personnel and Coast Guard vessel SVG 09, a rigid-hulled inflatable boat (RHIB) vessel donated by the U.S. government, are stationed at the sub base.

“The Southern Grenadines is the soft under belly security wise,” Gonsalves told the ceremony and expressed appreciation for US President Barack Obama’s Safe Seas Programme, under which the Coast Guard sub base was funded.

Gonsalves also said the sub base is important to tourism investment on the island.

“It is magnificent because the people who are coming with the marina and the people who are here would know you are going to be relatively safe from bandits who want to use the sea to come in and disturb our safety and our security,” he said.

He said the sub base is responsible for Coast Guard operations in the Southern Grenadines and supports the main base operation whenever required.

It has 24-hour very high frequency and digital selective call in watch on channels 16 and 17 respectively and can be contacted easily by VHF channel 16, Gonsalves said.

“This Coast Guard base fits strategically into our coastal surveillance plan. This operation is linked to the coastal radar system, that was financed by the government of Trinidad and Tobago with three sites on the mainland,” he said of the system that allow maritime officials to track traffic in the nation’s waters.

Meanwhile, U.S. Ambassador to Barbados and the Eastern Caribbean Larry Palmer said that SVG and the United States are part of a shared security partnership to address the transnational security challenge in the hemisphere.

“This partnership is underscored by the cooperative working relations between the Royal St. Vincent and the Grenadines Police Force and especially its Coast Guard and the United States’ military and law enforcement agencies.

“You have all been strong partners and have taken an aggressive stance to keep this nation safe from narcotics trafficking and other threats to the maritime borders of our shared region,” Palmer said.

“The base’s key location between St. Vincent and Grenada will strengthen your Coast Guard’s maritime law enforcement and search and rescue capabilities as well in this remote area…. This Coast Guard base is only part of the long-term United States commitment to support your on-going capacity building efforts to increase the country’s national security,” Palmer further said at the ceremony.

And, the Commissioner of Police  said he is thankful for the sub base, saying that SVG now has another point from which it can bring the fight to the criminals and protect citizens and visitors.

“For many years, the Grenadine islands have been a security challenge to law enforcement agencies. Being a multi-island state, there are many bays, beaches and inlets to the policed and patrolled. And because of our limited resources to do such, our borders can be considered as porous. As a result of these prevailing circumstances, these islands have been a haven for criminals from South America, Trinidad, Grenada.”

The police chief further said criminals have capitalised on the nation’s limited capabilities to man is borders, to traffic illegal drugs, smuggle guns and launder money.

“But today, as we commission this Coast Guard base, I want to assure the general public and our visitors alike that we will use this facility to optimal potential and to bring to justice those persons who contravene the maritime and other laws of St. Vincent and the Grenadines,” the police chief said.