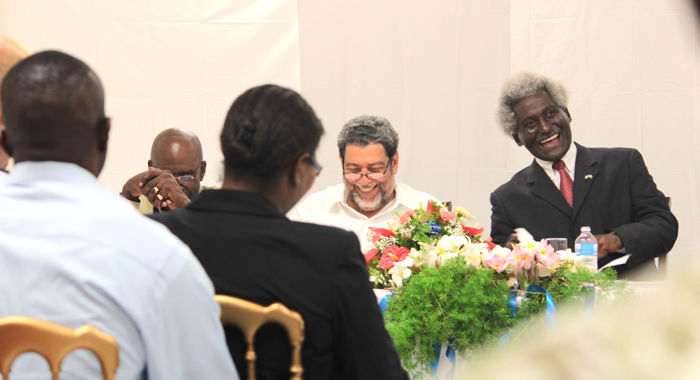 Prime Minister Ralph Gonsalves and U.S. Ambassador Larry Palmer laugh during a ceremony on Tuesday to commission the Coast Guard sub base in Canouan. (IWN photo)

Prime Minister Ralph Gonsalves says his government rejects the United States Department of State’s Trafficking in Persons Report 2014, which says St. Vincent and the Grenadines (SVG) is a source, transit, and destination country for men, women, and children subjected to forced labour and sex trafficking.

SVG is among countries on the State Department’s Tier 2 Watch List, which comprises countries whose governments, the State Department says, do not fully comply with the Trafficking Victims Protection Act’s (TVPA) minimum standards, but are making significant efforts to bring themselves into compliance with those standards.

“… we disagree very strongly with the designation of St. Vincent and the Grenadines as a source and destination for trafficking in persons,” Gonsalves said at a ceremony on Tuesday where U.S. Ambassador to Barbados and the Eastern Caribbean Larry Palmer handed over the U.S. funded Coast Guard sub base in Canouan to the government.

“We cannot prosecute an offender if there is no crime committed during the reporting period,” Gonsalves said.

Gonsalves, who is also Minister of National Security and Legal Affairs, said three human trafficking investigations were initiated this year, compared to five in 2013.

“We can only arrest and charge if there is sufficient evidence to do so, and there is an independent office of the Director of Public Prosecutions and we continue to be very proactive in identifying any victim of trafficking and we carry out a widespread sensitisation programme,” he further said.

He said he tabled in Parliament a report on effort to combat human trafficking in St. Vincent and the Grenadines.

“And there are many, many thing which we have done to comply with all the requisite standards, and I believe that the International Organisation for Migration would attest to the efforts that we have made. I also have in my hand the first quarterly report as is required under our law from the head of the Anti-Trafficking Unit, stationed at the Questelles Police Station to the Deputy Commissioner of Police,” Gonsalves further said.

“And I really would like the relevant authorities in the United States of America to come to St. Vincent and the Grenadines, and rather than speaking to unnamed officials to speak to the people in the Anti-Trafficking Unit, to speak to the Permanent Secretary in the Ministry of National Security, so that any misunderstanding can be cleared up; because, like the United States, we are deeply committed to the fight against the trafficking in persons,” Gonsalves said.

In its Trafficking in Persons Report 2014, the State Department said  NGOs and local government officials in SVG “report that some adults pressure children under the age of 18 to provide sex acts to men in exchange for money or gifts; third-party prostitution of children under 18 is a form of human trafficking. Local officials and NGOs have also raised concerns regarding foreign women engaged in prostitution or foreign workers subjected to forced labour in or transiting through the country; foreign workers employed by small, foreign-owned companies have been identified as particularly vulnerable to trafficking,” the report said.

It further said men, women, and children “remain vulnerable to forced labour in the country, primarily in the agriculture sector”.

4 replies on “PM says SVG not involved in human trafficking”