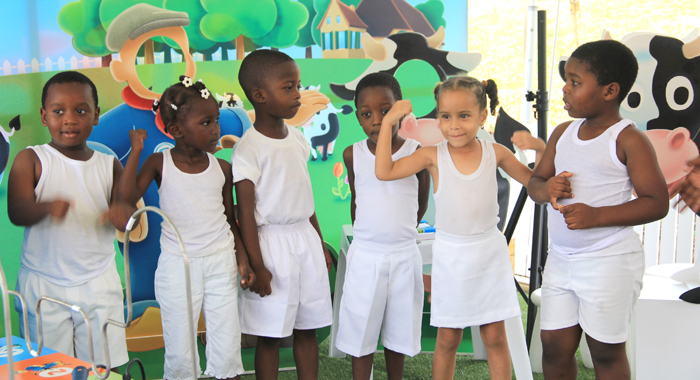 Pre-schoolers speak about the nutritional value of milk. (IWN photo)

(Scroll for link to photos and video)

It was a celebration that came almost three weeks late, but the pre-schoolers enjoyed it all the same.

The company also used the event to unveil its Dutch Lady Farm House.

Speaking at the event, Noel Browne, a sales and marketing manager at Coreas Hazells Inc., noted that World Milk Day, which is celebrated internationally on June 1, is an incentive of the United Nation’s Food and Agriculture Organisation, aimed at increasing public awareness of the importance of milk and milk products in our diet.

He further said World Milk Day also highlights the economic importance of milk throughout the world and serves as a reminder to everyone to include milk as a part of their diet.

He said the model farm consists of two milking cow, a sampling stand, a table with colouring books and crayons, and a spiral game.

“The farm house is designed to teach children how to milk a cow and to show children why they should continue to drink milk,” Browne said.

He further said that the event was delayed because of the later arrival of the paraphernalia in St. Vincent.

Meanwhile Esworth “Ezzie” Roberts, another sales and marketing executive at Coreas Hazells Inc., said the celebration of World Milk Day is an opportunity for parents and guardians to focus on the young minds and the importance of milk in their diet.

“The nutritional value of milk cannot be over emphasized as we guide their daily lives,” Roberts said.

“We are standing firm behind the Dutch Lady brand as we are cognisant of the fact that they are producers of milk and milk products of an exceptionally high standard. We are confident that at the end of this exercise there will be a renewed interest in the consumption of milk, namely the Dutch Lady Brand,” Roberts said.

The pre-schoolers gave several recitals about the nutritional valley of milk and sang “The Milk Song”.