The worst day in Brazilian soccer 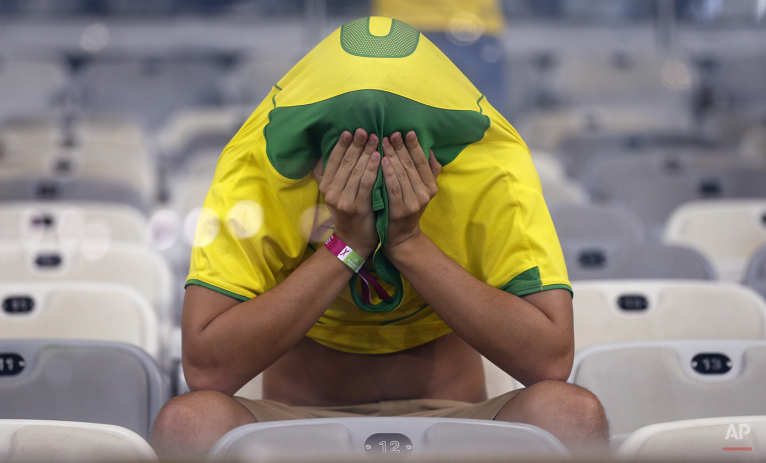 On Monday, Germany tore Brazil apart in an incredible six minutes where 4 goals was scored, which saw them roar into a 5-0 lead in 45 minutes before finishing 7-1 winners to earn a place in the World Cup final.

A mixture of shambolic and Caribbean-type Brazilian defending, combined with lethal passing, movement and finishing by Jogi Loew’s German side, contributed to perhaps the most extraordinary half hour in World Cup history.

Building a team around one player reaps what you sow.

Brazil lost two players and were decimated. The absence of Thiago Silva made Brazil very, very unstable at the back, but it was the loss of Neymar that saw Brazil short of ideas, direction and confidence.

It is always a risk to build a whole side around one player, particularly when the competition that team plays in only last four weeks.

Brazil reaped what they sowed.

I’m almost certain that PSG must be shaking their heads with the display and irresponsibility shown by him after smashing our $50 million big-money move from Chelsea. Of course, he will impress for PSG at times, but his catalogue of rash decisions against Germany served to highlight that he is not cut out for the greatest stage.

Luiz is a dead-ball specialist and exceptional on the ball, but his inability to hold position makes him an absolute liability and a huge risk at the back. Expect each wonder goal for PSG to be cancelled out by an inexcusable howler.

The Biggest World Cup Defeats Ever:

I could see Brazil didn’t have a plan to play against Germany. From the time they appealed Tiago Silva suspension, David Luis given the captaincy in front of the most experienced player for Brazil, Julio Caesar, and David Luis again holding Neymar #10 shirt during the playing of the Brasil National Anthem.

I don’t know what the lads from Brazil were carrying on their shoulders. You keep seeing them crying, before the match or after the match.

This team didn’t have enough experience to come to terms with the pressure of a big tournament like this in their own country. They fell apart emotionally completely.

It will be difficult to recover. Some players I don’t think will be back to wearing the Brazilian shirt. It is wrong now to criticise the players. On the field Germany taught the five-time champions of World Cup and football in general how to play football. They have to learn from that.

One reply on “The worst day in Brazilian soccer”