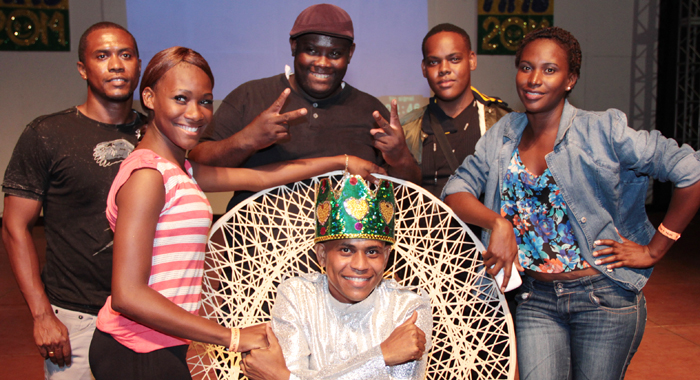 (Scroll for link to photo)

Results at a glance”

After making it to the calypso finals two years in a row — one year after he began singing calypso at the national level — Zamfir “Man Zangie” Adams felt that he had what it takes to win the crown.

“I felt like this year would have been my year to stand out and I did. I [took] another step and tried a new writer (Nigel Nelson) from Trinidad and Tobago,” Man Zangie told reporters after he was crowned Calypso Monarch 2014 Sunday night.

In winning the crown, the 24-year-old police officer was promoted to a similar rank as Antony “Papa Das” Glasgow, to be listed among the youngest to have won the National Calypso Monarch title.

He sang two powerful social commentaries — “Act Before It’s Too Late”, and “The Victims’ Cry”.

“’Act Before It Is Too’ late is all about the juvenile, and the parents need to set a good example because the youth are going astray and we need to pull them back,” the artiste said of the song.

“We are seeing a lot of rape cases, murder cases against women and I look on the Internet and see that we are number one in the Caribbean and number three in world,” he said in reference to the second song, which speaks about the impact of rape on victims.

“I am here to open an ear to the government and everybody else to look into it and get a change,” Man Zangie further said.

“It feels very great. It was tiring but definitely, it paid off,” he said of the victory.

The bard said he spent some EC$4,000 to organize the songs and invested time and efforts in props, and dramatization.

Man Zangie said he discussed with the writer the issues that he wanted to address in his song this year.

“And when he gave me first song, I felt so overwhelmed, so I told him, ‘Mr. Nelson, I think you have to write me another song because the people love it and definitely I need to win this crown; it is time, it is time enough, and I think I am ready’,” Man Zangie told reporters.

But while Man Zangie took the crown, it was second place winner Robert “Patches” King who stole the hearts of the crowd with his hit song “Ring De Bell”, a call for Prime Minister Ralph Gonsalves to call elections.

Patrons at the front of the stage rang at least two bells, while MP for Central Kingstown St. Clair Leacock and his fellow opposition lawmaker, Sen. Vynnette Frederick, danced and did a bell-ringing motion with their hands.

Patches also sang “Build Again”, a call for Vincentians to rebuild St. Vincent and the Grenadines.

Last year’s monarch, Skarpyon as third with “The Blight” and “Rising Higher”.