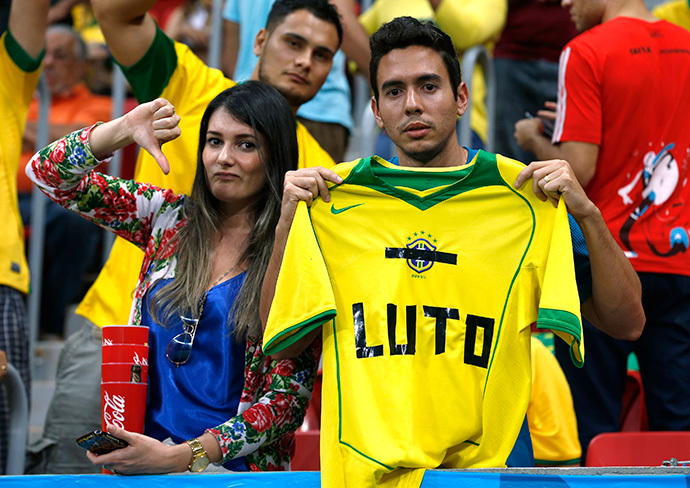 Fans hold up a Brazil jersey reading, “Mourn” during the 2014 World Cup third-place playoff between Brazil and the Netherlands. (Reuters/Jorge Silva)

The Netherlands clinched third place at the World Cup with an easy 3-0 victory over a forlorn Brazil.

The crowd then heavily booed the Brazilians off at half time, having given them a rousing performance of the national anthem only 45 minutes earlier.

Brazil have failed to score in two games in a World Cup tournament for the first time since 1978, when they also failed to find the net in two games.

I’ve learnt a lot about David Luiz watching him in the EPL and this World Cup. This is what I observed, hence, the reason why Mourihno sold him and Brazil get humiliated in two games (10-1).

He’s a big error-prone? His positioning’s all over the place?  PSG are a laughing stock for shelling out £50m to bring him in from Chelsea — but they knew all about his strengths and weaknesses when they signed him. Laurent Blanc won’t be doing cartwheels, but he’s seen nothing from Luiz that he didn’t know already.

Brasil fans got tricked after Big Phil led them to the confederation cup with the same team.

But supporters must remember this is a world cup where the pressure is more intense. I can’t see a young/inexperience team winning a World Cup regardless of the crowd support.

If Scolari could have only include the following players who were top performers with various teams across the globe Brasil and included them to majority of his young squad, they would have been smiling toady, Sunday, 13 July, 2014, around 6 p.m. Eastern Time.

These are the players I was looking at during the leagues across the world:

This is my prediction for Brazil to win their 6th World Cup whenever. They are to include some raw talent from the Brazilian League without exposing them to European Leagues where they wouldn’t be monitored and train differently.

And I think it’s time that Brazil utilize a foreign coach along with their own.

One reply on “Brazil’s national sorrow is complete”