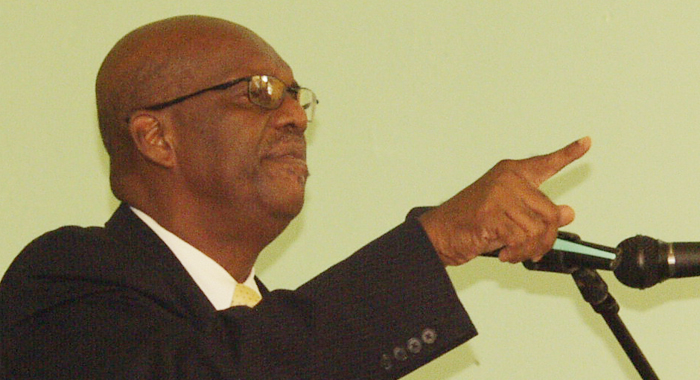 Leader of the Opposition Arnhim Eustace has pointed to apparent contradictions in the Marriage Act, as they relate to the Registrar of the High Court.

Eustace Tuesday night said he had photographs of former Registrar Tamara Gibson-Marks performing wedding outside of her office and said this is contrary to the Marriage Act.

He, however, said he was more concerned about whether fees collected for those weddings were paid in to the government.

But Eustace in a statement to I-Witness News on Wednesday said he now has additional information that the Marriage Act was amended by Act 30, 2007 by inserting special provisions 17-A-E specific to the Registrar/Registrar General.

“By virtue of section 17(d) the Registrar is now permitted to solemnise weddings at a place she deems fit, outside of her office, if the parties to be married request it. The same Marriage Act at section 12 however says that the Registrar shall NOT act as a marriage officer elsewhere than in her office,” Eustace said in the emailed comments sent via New Democratic Party spokesperson, Sen. Vynnette Frederick.

“It should be recognised that these sections create confusion in the minds of the general public,” Eustace said.

“Again, in the amendment to the Act at section 17(e) the law provides that the Registrar is to be paid $100.00 for the Consolidated Fund if she does a wedding outside of her office and an additional $100 is to be her personal remuneration if the marriage was solemnised by her outside of her office.

“So, $200 is to be paid for weddings done outside of the office, with $100 going to the Consolidated Fund and $100 to the Registrar as personal remuneration. The act at section 17 (d) says that any expenses incurred by the Registrar for conducting marriages outside of her office cannot be claimed back from the government,” Eustace further said.

Attorney General Judith Jones-Morgan asked Gibson-Marks to resign on May 21 and has since applied to have her disbarred from practicing law in St. Vincent and the Grenadines.

Sources have told I-Witness News that some EC$300,000 from an account that the Registrar held in trust is unaccounted for.

The disbarment application will be heard in September, Prime Minister and Minister of Legal Affairs, Ralph Gonsalves, told a press conference this week.