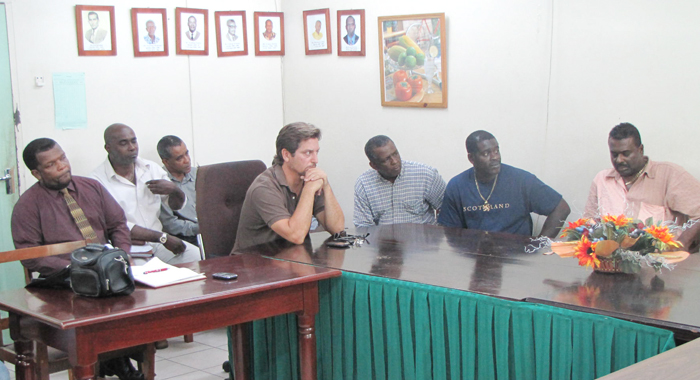 Cacao farmers, and officials from the Ministry of Agriculture and the Cocoa Company met on Tuesday.

The St. Vincent Cocoa Company (SVCC) on Tuesday outlined to farmers the compensation they will receive after the firm announced last week that it will end its operations here by the end of August.

“By virtue of the fact that notice is not given — two years’ notice, they are writing off all the money that [farmers] borrowed, against the need to give notice,” Minister of Agriculture Saboto Caesar told a press briefing on Wednesday.

During the press conference, the minister briefed the media on the outcome of the meeting between his ministry, the SVCC and famers on Tuesday.

The 50-year agreement that the government signed in 2011 with Armajaro, owners of SVCC, said two years’ notice must be given before ending the agreement.

Famers who did not receive loans from the SVCC will each receive EC$$1,000.

“But coming out of the discussion yesterday, it was decided that farmers who have over 3,000 plants — it is not confirmed — will get between $1,500 to $2,000. And there aren’t many famers who have more than 3,000 plants,” Caesar told reporters.

“But, like all other things, some seeds may have fallen among thorns,” he further said of famers who exited cocoa cultivation for various reasons.

He said farmers who started then moved out of the sector will also get some money.

Ten farmers had received loan totalling EC$34,800 from the SVCC micro finance programme an this amount will be written off.

Caesar said farmers appreciated that the SVCC assisted in clearing lands, gave plantlets, provided extension service that assisted in knowledge transfer, and now they have cocoa trees, some of which that are already producing fruits.

He said the meeting ended with the 20-25 farmers agreeing the farmers who established field pursuant to the Armajaro programme will form themselves into an established cooperative.

A committee of five persons was selected to begin formalising a cocoa cooperative.

The members of the committee are Steven Adams, Christopher Daize,

Caesar further said he is aware that other persons in the sector have established organisation to address relevant issues.

“St. Vincent and the Grenadines is a democratic country, we endorse and we agree and we invite the private sector, whether … someone has to come to an individual singly or whether you were coming as a cooperative or as a group or as an NGO, we invite everyone to come and be a part of the transition and also to add significant value as we begin to advance a very home-grown and indigenous structure,” he said.

The minister said there were some hard feelings about the abrupt end to the agreement.

“Quite naturally, if you are in a relationship and the relationship did not work out quite as you had planned it, quite natural, there were some sad feeling, persons felt a bit sad, but I must state, no one was angry,” he said.

“It was very interesting. Persons expressed sadness that they no longer had an opportunity to work with what they considered, in their estimation, an internationally renounced cocoa distributor. They thanked the company for coming to St. Vincent and working with them and for transferring the knowledge.”

The minister, however, said that at the meeting farmers were making application for more plants.

“When we got past the shock that we have to do it on our own, and I heard persons saying, ‘The only outstanding matter I want to discuss is the fact that I applied for some plants and I haven’t gotten them as yet. And I hope that the ministry is very proactive in giving me my plants.’

“So, from within, the person who were immediately affected, I am seeing an ease, a calm, comfort and a zest to go forward,” Caesar told the press briefing.

The SVCC has some 200,000 cocoa plantlets in its nursery, and distribution will continue on Monday.

Minister Caesar said he is expecting massive take up.

“But even with this take up, we have to make sure that we get the agronomics right. Speed is good but efficiency and efficacy, these are critical,” he said, adding that the   Cocoa, Condiments, and Spices Unit will guide first time cocoa farmers.

Some 54 farmers went into cocoa cultivation with the SVCC after the 2011 agreement was sign, while a further 10 to 20 entered the sector, outside of the Armajaro set up, in addition to pre-existing cocoa farmers.

SVCC has invested more than $5 million in SVG, the Minister said.

Caesar said the company decided to cease operations here because it no longer sees local production as “a viable one” in light of their targeted acreage of cocoa cultivation.

The company had a target of cultivating 5,000 acres of cocoa in SVG.

“Some persons, from the get go, said that this was very ambitious, taking into consideration that here in St. Vincent and the Grenadine we have some 18,000 acres of land basically left for agriculture,” Caesar told the press conference.

“That was a big number and over the last four years, they were only able to rehabilitate 50 acres and to plant 200 new acres,” he said.

Caesar said he will report back to the media in six weeks, after the transition to his ministry is completed