Under Gonsalves’ chairmanship, ECCB to focus on financial stability 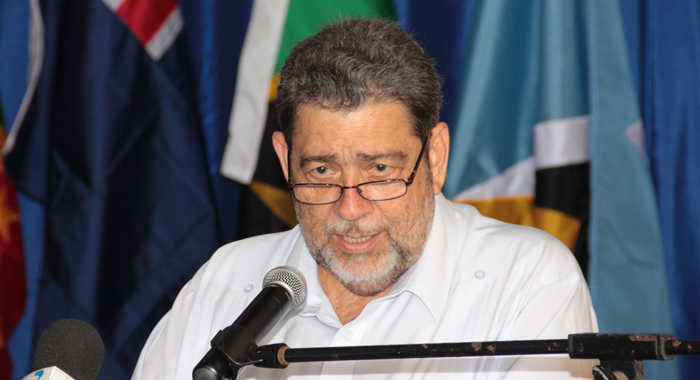 The Eastern Caribbean Central Bank (ECCB) will over the next year focus on financial stability, fiscal and debt sustainability, and growth and competitiveness, incoming chairman, Prime Minister of St. Vincent and the Grenadines Dr. Ralph Gonsalves said on Friday.

“I must emphasise that financial stability will remain paramount and will continue to be addressed using the strategy for strengthening the resilience of the financial sector, which was approved by the monetary council,” he said at the ceremony at Buccament Bay Resort, west of here.

Gonsalves has taken over the rotating chairmanship from his St. Lucian counterpart, Dr. Kenny Anthony, and warned that not maintaining the financial stability “would weaken immensely all the other things which we are trying to do.

He said that in addressing the immediate challenges in the banking sector, the focus will be on the restructuring and recapitalisation of the banking system.

“And under my chairmanship, the exercise to measure the capital requirements of the commercial banks will be completed.”

“This will facilitate the commencement of the restructuring and capitalisation of the commercial banks, with immediate attention given to the banks which have been put under the control of the Central Bank.”

“I am conscious of my obligation and responsibility to assist in guiding the Monetary Council as the Central Bank implements the regulatory processes and commences the restructuring and recapitalisation of the bank,” he said.

Gonsalves further said that the economies of the Currency Union have also been affected by natural disasters and knock on problems particularly in the insurance field, with the demise of CLICO and BIACO and the challenges faced by indigenous banks in terms of capital adequacy and liquidity.

Across the commercial banking sector, there are also real problems relating to non-performing loans, which have remained by and large above prudential levels, an inadequate provisioning for loss.

The currency union has also registered a decline in profits in some commercial banks, and in on-banking financial institutions outside of insurance companies, there have been challenges and regulators have had to intervene.

“We always must remember that the constraints of small size, the effects of the openness of our economies and our essential or indeed existential vulnerabilities, that there are always issues which we have to address and to overcome those limitations while at the same time taking advantage of the possibilities which are inherent among us and in the regional and global system.”

“I accept the chairmanship in an economic environment which still remains very challenging, because significant growth in the international economy is not very favourable. Indeed the international economy is expected to be weak to moderate and it is uncertain and certainly uneven, between countries in the developed and emergent economy and unevenness within the leading sectors in those economies.”

He said the figures indicate that there is only weak to moderate growth in the economies of the United States, Canada, the United Kingdom, and the European Union.

“… and these are our main trading partners. But even if we have a moderate recovery in the global economy, there is always a time lag between what takes place there and what takes place here.

He said even if there is some moderate improvement currently, the region will not see the full impact until next year.

“So that across the currency union, the expectation is that economic activity will remain moderate to low and that we will probably as a currency union not return to the pre-crisis level until by the end of next year,” although some countries have done do.

Gonsalves said the work done by outgoing chairman Prime Minister Anthony and his team over the past year was extraordinary.

“I want to thank the people of the currency union for focusing on hard, smart productive work in the main and to have assisted all of us in seeing some light at the end of the tunnel as we come out from,” he said.

He, however, added that a difficult bundle of challenges brought on by the financial meltdown of September 2008, meltdown metamorphosed into the continuing global economic crisis.

He said those who have not been dedicated to hard, smart labour should get on to that train and leave that which focuses on “leisure, pleasure and nice time”.

He said such a work ethic is necessary to grow the economy.

There will also be no growth if, at the managerial and all levels of endeavours in the private and public sectors, citizens do not perform optimally.

“No productive society has been established in the interest of people without hard and smart work,” Gonsalves said.

“That is why we have shot ourselves in the foot with the increase in criminal activities, generated by those who focus on leisure, pleasure, and nice time and who, invariable have insatiable desires for material gain which cannot be attained reasonable from what is available, and they are invariable in a state of disappointment and disillusionment, because it began first with a set of illusions about what can happen…

“I accept the chairmanship of the Monetary Council as an honour of the people of St. Vincent and the Grenadines, and I pledge, as always, to take my responsibilities very seriously and to help my colleagues the governor and his team to build upon what we have already so assiduously constructed,” Gonsalves said.

7 replies on “Under Gonsalves’ chairmanship, ECCB to focus on financial stability”