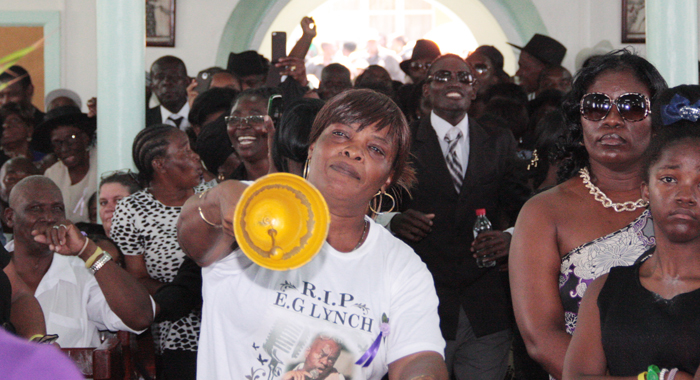 A woman rings a bell in protest against Gonsalves delivering a tribute at E.G. Lynch’s funeral on July 19, 2014. (IWN photo)

(Editor’s Note: Hans King, press secretary to Prime Minister Dr. Ralph Gonsalves, has circulated to the media the following letter to the Editor of Caribbean News Now! It is in response to this article — “St Vincent PM booed out of own constituency“. Please scroll for an I-Witness News video of the booing incident inside the church.

Your news story dated Thursday July 24, 2014, under the bold caption: “St. Vincent PM booed out of own constituency” is riddled with misinformation, misrepresentation, and falsehoods.  Your reliance on a report from Jerry George, a well-known supporter of the opposition New Democratic Party (NDP) and a wild, persistent critic of Ralph Gonsalves, does an immense disservice to your readers. Let us state the facts:

The falsehoods of George’s report on which you relied can be seen from the following:

(i) The Prime Minister was not “literally booed out of his constituency”.  Indeed, in the aisle of the church, dozens of supporters hugged, kissed, and “mobbed” the Prime Minister.

(iv) The Prime Minister was not “stunned by the reaction” as alleged by George.  Indeed, the video footage showed the Prime Minister in a calm, dignified disposition and manner.  He was an oasis of calm in a desert of unruly behaviour by a minority of persons in the church.  The Prime Minister greeted, hugged, and waved to cross-sections of the congregants.

The unvarnished truth is that the opposition NDP has suffered a major political setback in its organising of the unruly, criminal conduct in the House of God and in its defence afterwards of that which cannot be defended.  Actually, it is a criminal offence to disrupt a church service punishable by two years in jail.  This minority of unruly NDP supporters left the church in an awful state.

The NDP leadership with their backs to the wall are busy criticising almost everybody who has denounced the unruly, disruptive behaviour in the church and the failure or refusal of opposition leader, Arnhim Eustace, to get up and seek to calm his unruly supporters who came substantially from his East Kingstown constituency.

The outspoken condemnation of the unruly, disruptive behaviour of the NDP supports has come from the following among other persons: Parnel Campbell, Q.C., member of the NDP and former Attorney General in three NDP governments; Father George, a distinguished and elderly priest in the Roman Catholic Church; Pastor Clarke of the Pentecostal Church; “Too Cool” Chris, a radio personality on Hot 97, who normally supports the NDP; and the Editor of the esteemed “Searchlight Newspaper”. Even a prospective NDP candidate, Dr. Jules Ferdinand, has labelled the unruly conduct of the minority of persons at the funeral service, as “inexcusable”.  Lynch’s accomplished daughter has also expressed her disgust at this unruly minority in the church.

The NDP leadership are also criticising vehemently Sir James Mitchell, founder of the NDP and former four-term Prime Minister, for adverse comments which he made publicly in his tribute to Lynch at the funeral.

So, your report from Jerry George is largely propaganda stuffed with untruths, half-truths, and glaring factual omissions.  Most of all, be assured the NDP is taking a beating on this issue.  Do not allow yourself to be manipulated into turning Caribbean News Now! into an unreliable, propaganda on-line site.

Hans King
Press Secretary to the Prime Minister
of St. Vincent and the Grenadines