My perspective on the funeral service of my father, EG Lynch 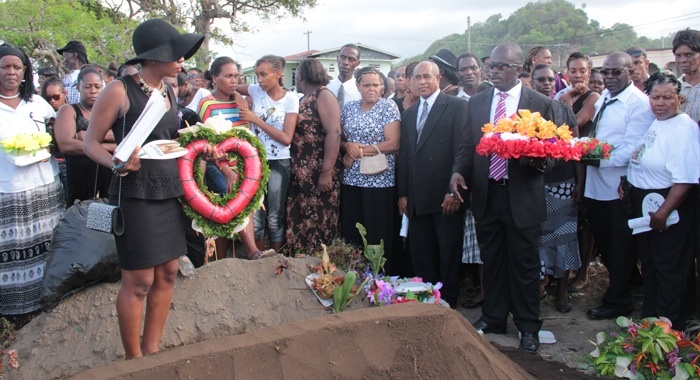 Shafia London, and Keino Spring, prepare to lay wreaths on the grave of thier father, E.G. Lynch. (IWN photo)

On Saturday, 19th July 2014, the children of Mr. Elwardo Lynch held an open funeral service for him in keeping with the reverenced traditions of our society.

Our father was a man who touched the lives of many and who was affectionately loved and adored. We therefore felt it necessary to allow the entire nation to share in this moment with us to give my father the send off he rightfully deserved. Unfortunately, we were prevented from doing so to the extent to which we desired due to callous and crude politically motivated venting by some members of the congregation. Whilst we appreciate the overwhelming love and concern many had for my father and the desire to fight against what they deemed hypocrisy, there is a time and place for everything and the church was certainly an inappropriate place and his funeral an inappropriate time for what manifested.

Saturday July 19th, were the final moments that our family had with what physically remained of my father. Whether one agrees or disagrees with the choice of who was present or who was chosen to speak at his funeral should be of no relevance to those who came to pay their individual respect to my father. To rob us, his children, of this final intimate moment is a much more grave injustice to EG Lynch than any injustice any other human being could have possibly committed against him. There is unapologetically no justification for the disrespect shown to us and to my father on that day, a day that would forever remain vivid in our minds for the wrong reasons.

For if we do not show respect to the dead, we will not show it to the living. The rituals surrounding our treatment of the deceased signify the respect we have for human life itself. That’s why we prepare them decently before we bury them. We treat the deceased with this kind of reverence because to do otherwise would be to show that we have no intrinsic respect for our common humanity and for what it means to be a human being. If we don’t behave with dignity, we dehumanise not just the person who has died, but ourselves and our fellow human beings, too. The shocking behavior of a group of persons at the funeral service of my father suggest that St.Vincent and the Grenadines is suffering not merely from a political crisis, but a moral one, too — and one that reflects shamefully upon all of us.

My family reserves the right to invite or welcome who it wishes to this funeral service. No one else reserves the right but us. We could have opted for a private funeral service but instead we opened this ceremony as we were aware that my father touched the lives of many in more ways than one of many whether NDP, ULP, DRP or Green party. All are not privy to the private affairs of my family; and certainly unlike too many aspects of our nation, the private dealings of my family are not fuelled by politics.

Whilst my father performed a political job for 11 years, he spent 70 years on this earth. During that period he interacted with many persons and maintained amicable relations outside the realms of politics. My father had a job, which he carried out well and admittingly at times with unbridled passion and this job had consequences and my father was fully aware of that and accepted it. The ramifications were at time heart wrenching, but my father continued to perform the duties expected of him. Luckily and unknown to many, my father was a simple man with nomadic tendencies; the physical possessions of this world were of little consequence to him. As long as my father could read and speak, he was a contented man. My father’s life in its entirety was not defined by politics and this was something he shared with me privately.

My father unfortunately suffered from diabetes, a debilitating condition that impacts so many in St. Vincent and the Grenadines. My father’s failing health should if anything highlight the markedly high prevalence of diabetes and related factors in Afro-Caribbean population such as St. Vincent and the Grenadines, with frequent co-morbidities and increased mortality. But of course, we miss this because politics consumes us and somehow manages to be the causative factor for all things in this country.

But I digress. We, the children of EG Lynch ensured that my father was granted the best possible care even as his condition worsened, including placing him in a private facility that was able to provide adequate medical support. I use this opportunity to thank the NDP and others who have in some way whether financial or otherwise assisted us with care of my father at the nursing facility.

I can confidently assert that my father was not killed by any individual or political circumstance and those who are not privy to all the details of my father’s medical condition should refrain from making baseless assumptions to justify demented political obsessions and arguments. In fact, it saddens me, that many who voice their opinions whether red or yellow or blue or green have never once set foot to visit my father when he was ill whether at the hospital or at the nursing facility. It was then he needed support. It was then he wanted to know that someone cared. The show of irreverence at his funeral is certainly not what he wanted.

NYU professor Jonathan Haidt, in “America’s Painful Divide,” for The Saturday Evening Post once wrote and I concur: The most important lesson I learned is that each side, each team, sees some threats that face our nation, and is blind to the threats that the other side sees…

Regardless of who wins the …election, (We) have some healing to do. It’s going to be difficult, but not impossible. Instead of demonizing each other, we need to make the effort to understand and respect each other’s views even if we disagree. That doesn’t mean capitulating. It’s called being open-minded.

A free but civilized people must exercise cautious discernment in separating politics from progress less we become the very enzymes causing the decay of the moral fabrics of our society. If the partisan divide is clearly wrenching even at a time of mourning, on a larger scale, it’s tearing our country apart.

Our leaders need to act now to stop this political division. I call on our teachers, business leaders, church leaders and certainly our political leaders to start in their circles to circumvent this political poison that is rapidly spreading through our small nation. I have great respect for both Dr. Gonsalves and Mr. Eustace but from my grieving heart I beg of them to lead the way to encourage their supports to respect political differences.

At the end of the day, we must all live in this country. We must limit the scope of man’s political jurisdiction to the essential duties of prudent government, only then can we enable society to achieve true progress in business, communities, families and churches. Prudent government is for what my father so passionately fought. He did not fight for us to sink to the point as a nation where his family cannot even grieve for him at a funeral. Our moral sense, which God ordained for good, should always urge us to put aside our political differences such as during the grieving moments of a family. Let us not prolong the issue. Please let my father rest in peace.

I pray for the future of my son.

17 replies on “My perspective on the funeral service of my father, EG Lynch”