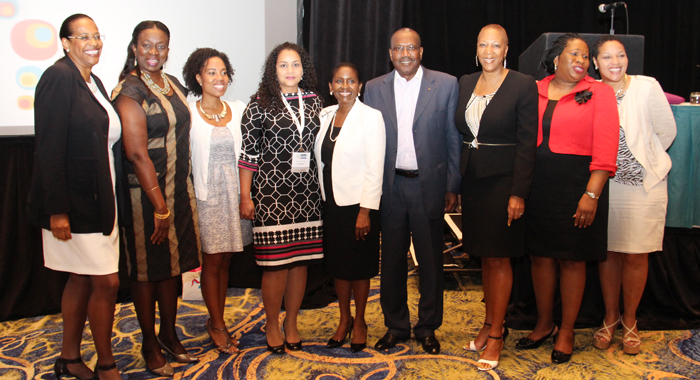 Telecomms executives pose after the launch of the forum in Nassau.

NASSAU, Bahamas (CMC) — The Caribbean Women in information communication technology (ICT) forum (CWIC) has been launched here amid predictions that improving the circumstances of women in the sector can benefit regional economies.

“This forum is meant to address challenges and benefits for new women entering the ICT field, to look at how to encourage more women and girls to enter in the sector, to recognize and retain women in ICT, to look at the role CWIC can play in the CARICOM single ICT space and to come up ideas for collaboration on joint projects, for especially the girls in ICT today,” said CANTO secretary general Regenie Fräser.

The forum was launched as part of the 30th annual conference and trade exhibition of CANTO, a regional telecommunications organisation and the organisers say the establishment of CWIC is for the expression and exchange of views, as well as the cooperation and coordination of activities for advancing Caribbean Women in ICT.

At the launch, women executives in the ICT sector spoke of the realities they face, and why improving the circumstances of women in the sector can benefit the economy at large.

Wendy Mc Donald, director of corporate and government affairs at Columbus Communication, said research had shown that there are not enough women in the ICT sector.

“Research has also shows that when women and girls are involved, there is an unparalleled value brought to the sector,” she said, adding that according to research, while there are a lot of opportunities for women in the sector, there is a lack of skills.

“Another thing that we have noticed is that public and private sector organisations, they both agree that increasing women at the top of organisation is not only good for those women, their professional development, but is also good for women, because more balanced decisions are taken at the top level when you have women involved there,” Mc Donald said.

She said that the gender digital divide still affects people all over the world and it has been proven that women still use ICT less than men.

“In Latin America and the Caribbean, for example, there exists a 10 per cent gender gap between male internet access level and that of women.”

Mc Donald said this is due largely to socio-economic circumstances, but it can be argued that there has not been enough effort to stimulate and instruct increased uses of ICT among women.

“Yet, empirical evidence has also shown that a higher presence of women in the ICT sector or simple increased access to these technologies has far-reaching benefits for society as a whole.

“The fact is that it is very profitable to promote women’s participation within the ICT space. It is great for business and good for the economy, as higher Internet penetration numbers is directly proportional to wider GDP growth,” Mc Donald said.

She said that by working closely with CANTO, Columbus now has the potential to ensure that women occupy a large portion of the growing landscape in the Caribbean.

“By promoting women in the ICT space, we will be in a better position to close this gender gap, which will only widen without a more focused effort,” Mc Donald said.

Group projects director at Digicel, Lisa Lewis, said ICT is conceived as a male dominant industry and that “like any male arena, women in ICT have to work hard to be accepted as a competent talent in this area.

“The perception therefore needs to be tackled by encouraging younger generations to see this industry as one to aspire to,” Lewis said, noting that women outnumber men in many tertiary institutions.

“The opportunity does exist. The opportunities are perhaps not understood, and it is an aggressive and dynamic field, moving at a very fast pace. We need to stay in touch with the new and emerging technologies to stay relevant. Like all diverse situations, women will bring a different perspective to the male logic in ICT sector,” she said.

Lewis, however, noted that many women are in charge of human resources they do not receive equal pay.

“We need to ensure there is equal opportunity for promotion. The sector is growing, and, as it continues to grow, we develop and include strategies for increasing women in the area. Perhaps we need to have more women as ICT ambassadors,” she said.

“Those of us in this area, we need to encourage more women to be in the sector, and we need to start from high schools,” she said.

“We do not have and ICT subject as yet, and that I something I think we need to start pushing for,” she said.

Vice-president of customer services at the Bahamas Telecommunication Company (BTC), Patricia Walters, said women in telecommunications are underrepresented at all levels, and especially in decision-making capacity.

“We have 30 per cent women as technicians, 15 per cent as manager, and 11 per cent at the strategic or executive leave. Many women, unfortunately leave midcareer … nine per cent of women remain in the sector after the age of 45 years old — so most of them have dropped out,” she said.

She said research has shown that women outperform men in many different capacities, including developing others, building relationships, commitment to integrity, taking initiative, and driving for results.

“The studies are there. Men have many other attributes too that they outperform women on, but we have a role to play, and ICT is one of the fastest growing industry in the world and we need women to be part of the workforce.

“Organisations that have women as part of the workforce, studies show, can earn on average up to 35 per cent, more in return on investment than those organisation where decision making are done only by men.