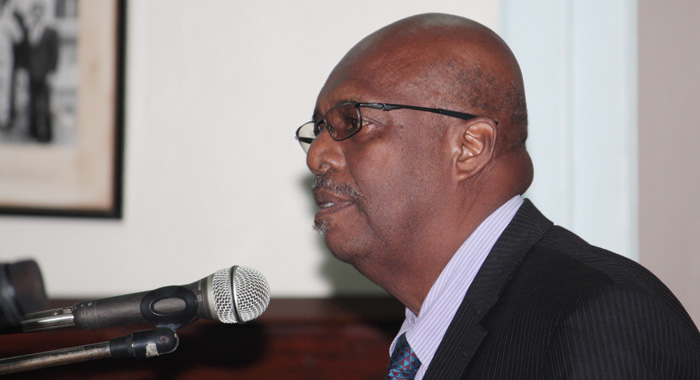 I write in response to an article posted on I-Witness News on 13th August under the headline “Eustace accuses gov’t of entering austerity deal with IMF”. The article was written by E. Glenford Prescott.

In it, the writer of the article understood the Honourable Leader of the Opposition to assert that the Government of Saint Vincent and the Grenadines was “subtly introducing austerity measures on its citizens as a result of an agreement with the International Monetary Fund (IMF).” The article goes on to quote the Honourable Leader of the Opposition at length, both in his interpretation of the IMF’s recent US$6.4 million disbursement to Saint Vincent and the Grenadines (SVG) under their Rapid Credit Facility and Rapid Financing Instrument; and in his praise of the “tough decisions” taken by the governments of Barbados and Saint Lucia to fire and/or cut the salaries of thousands of public servants. I assume that Mr. Prescott accurately reported the Hon. Leader of the Opposition’s comments.

The Hon. Leader of the Opposition’s experience, competence and vision as an economist is an oft-discussed topic in Saint Vincent and the Grenadines. I do not intend to add to that debate in this letter. I am sure that the Hon. Leader of the Opposition will have future opportunities to expand on his thesis that the government of SVG is imposing “austerity” policies, in spite of increased hiring, continuing wage increments, on-going social programmes, greater investment in Information Communication Technology, no across-the-board tax increases, the construction of an International Airport, and a generous and compassionate response to the Christmas Floods.

Additionally, I am confident that he will explain the distinctions that cause him to apparently condemn the alleged “wage freeze” in SVG while praising the salary cuts in Saint Lucia and the firing of 5,000 public servants in Barbados as “tough decisions” that will have a “positive effect” on those countries’ economies.

Rather, the intent of this letter is to take issue with the Hon. Leader of the Opposition’s assertion in the article that the government of SVG is imposing austerity “to satisfy the agreement which they have made with the IMF.”

The Hon. Leader of the Opposition must know that the government of SVG has no austerity agreement with the IMF. I can only assume that he misspoke.

The word “austerity” and the acronym “IMF” are emotionally charged terms in developing countries, and the two are often linked in the minds of people. Long ago, when the Hon. Leader of the Opposition was a young economist, the IMF’s sole function was to impose austere “conditionalities” on financially struggling countries in exchange for bailout funds. These conditionalities were often harsh, and had disproportionate effects on poor people.

The IMF is still in the business of imposing conditionalities on countries as part of bailout agreements. But as the Hon. Leader of the Opposition has aged and evolved, so too has the IMF. In addition to the conditionalities associated with its traditional lending, the Fund has also developed mechanisms that lend money to countries at extremely favourable terms, and without conditionalities. These mechanisms are usually triggered in response to an external shock or natural disaster that affects the country’s economy. Countries that take advantage of these new facilities, like SVG, do not enter into “austerity programmes” with the IMF, and are not held to any conditionality targets or reviews.

Conditionalities and the IMF – The “Big 3”

A number of CARICOM countries have been forced to enter into austerity arrangements with the IMF in recent years, particularly in the wake of the 2008 global economic and financial crisis. Within our region, the IMF has a number of different packages and programmes that impose conditionalities on countries. These include:

You will notice that the US$6.4 million that SVG received from the IMF dis not come via the “Stand-By Arrangement,” the “Extended Credit Facility,” or the “Extended Fund Facility.” Rather, the IMF press release quoted by the Hon. Leader of the Opposition clearly states in its very first paragraph that the money is “to be drawn equally from the Rapid Credit Facility (RCF) and the Rapid Financing Instrument (RFI).”

The Hon. Leader of the Opposition is aware that the “Rapid Credit Facility” and “Rapid Financing Instrument” are distinguishable from other IMF programmes in a number of ways. Chief among these distinctions is the fact that these programmes lack the conditionality and review features of traditional IMF lending. If the Hon. Leader of the Opposition visited the IMF website, he would see that the Rapid Credit Facility provides assistance “without the need for program-based conditionality.” The website further states that the Rapid Credit Facility is used “in a wide variety of circumstances, including shocks, natural disasters, and emergencies resulting from fragility.”

In the case of SVG, the Rapid Credit Facility clearly came into play as the result of the natural disaster of the Christmas Floods. As the IMF states, the “RCF is provided as an outright disbursement without explicit program-based conditionality or reviews.” This is in direct contradiction to the Hon. Leader of the Opposition’s assertion that the government of SVG had entered into an austerity arrangement with the IMF.

Similarly, the “Rapid Financing Instrument” is triggered in response to “a broad range of urgent needs, including those arising from commodity price shocks, natural disasters, post-conflict situations and emergencies resulting from fragility.” Again, the natural disaster of Christmas Eve is obviously the event that enabled SVG to access this Instrument. Like the Rapid Credit Facility, the Rapid Financing Instrument provides assistance “in the form of outright purchases without the need for a full-fledged program or reviews.”

In light of this, the Hon. Leader of the Opposition clearly erred when he attempted to link disbursements to SVG under these instruments to some sort of austerity agreement or programme by the IMF.

Why a $6.4 million austerity programme?

Another fact that flies in the face of the Hon. Leader of the Opposition’s claim that SVG had entered into an austerity agreement with the IMF is the relatively small amount of money involved. US$6.4 million is hardly enough money to spur structural adjustment in SVG. Nor is it worth the sacrifices and intrusion inherent in an IMF Programme.

If you look at examples of recent “austerity” programmes by the IMF in the Caribbean, you will notice that Grenada is requesting US$22 million under the Extended Credit Facility, while Saint Kitts and Nevis received US$84 million and Antigua and Barbuda accessed US$118 via Stand-By Arrangements. Jamaica is currently in the midst of a massive US$932 million IMF programme under the Extended Fund Facility.

Given that neighbouring OECS countries have sought between US$22 million and US$118 million from the IMF to support structural adjustment programmes, it begs the question of why SVG would “agree” to “austerity” in exchange for a relatively paltry $6.4 million. Surely, if the Vincentian economy is in the dire straits proclaimed by the Hon. Leader of the Opposition, SVG would need more, not less, support from the IMF.

WHY hide an austerity agreement with the IMF?

I must confess to being baffled by these statements.

In every other incidence of every other IMF austerity programme, there is no “subtlety” involved. There is also no requirement to “study” and read between the lines of an IMF press release. Why? Because the IMF loudly announces the broad terms and conditions of all of its so-called “austerity programmes.” The information is right on its website. Why would the IMF suddenly resort to subtlety and subterfuge in the case of SVG?

Further, in every other case of IMF austerity, the governments involved clearly state that the cuts and restrictions involved are as a result of IMF conditionality. There is no need to “come clean.” Why? Because there is political cover in being able to blame the IMF for the cuts and austerity. Is it more sensible to explain to the electorate that austerity is being imposed as a result of IMF conditions, or to simply have them think that the government is arbitrarily cutting salaries, jobs and social programmes for no reason?

The 2014 Budget for SVG, which the Opposition declined to debate fully, contained an unequivocal rejection of austerity policy. However, the Prime Minister’s Budget speech explained the need for “‘Prudence’ on all fronts especially on recurrent expenditure.” The Prime Minister also outlined a policy involving “the pursuance of a programme of fiscal consolidation within the framework of ‘prudence and enterprise’ so as to ensure, among other things, that fiscal deficits and debts stay within manageable limits.”

As such, the supposed clues that the Hon. Leader of the Opposition so carefully unearthed through his study of the language in an IMF press release were in fact stated policy objectives easily found in SVG’s Budget of seven months ago. Indeed, much of the language of the IMF’s press release came not from the IMF, but from the letter written by the Prime Minister to the IMF requesting post-flood relief!

No austerity agreement with the IMF

Even a casual reading of the IMF Press Release will show that the US$6.4 million received by SVG came as a result of the Christmas Floods, and were disbursed via mechanisms that do not impose conditionalities — much less austerity — on the receiving country.

Further, the idea of a small $6.4 million austerity package defies fiscal logic, especially when neighbouring countries have sought and received up to $118 million for IMF adjustment programmes.

Finally, there is no precedent for secret or subtle austerity agreements with the IMF. The IMF is a transparent international body that makes public the broad outlines of the arrangements and conditions of its agreements with countries. No special economic knowledge is required to understand these agreements; just an Internet connection and the ability to read.

I certainly understand that is easy to misspeak in a live radio format, and I am willing to give the Hon. Leader of the Opposition the benefit of the doubt in that regard. However, given the emotive nature of the “IMF austerity” charge, I thought it necessary to offer this rather lengthy attempt to set the record straight. Hopefully, the Hon. Leader of the Opposition will offer his own clarifications on this apparent misstatement, as well as further explanations of his support for salary cuts and/or the firing of public servants in our current context.

10 replies on “Eustace is wrong on alleged IMF-SVG agreement”