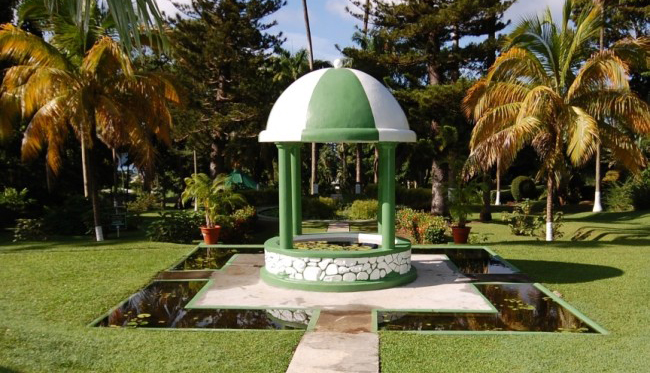 The iconic dome at the Botanical Gardens in Kingstown. (Internet photo)

Curator of the Botanical Gardens Gordon Shallow says there is “a great need for greater financial support [for] the Gardens” as it celebrates it 250th anniversary.

The Botanical Gardens, which was established in 1765, is the oldest in the Western Hemisphere, and a series of activities will begin this month to mark its 250th anniversary.

Speaking at the launch of those activities recently, Shallow said that after becoming curator of the Gardens on April 10, 2013, he conducted a literature review, because he wanted to find out why the Gardens, “a place of such rich, cultural and historical, and scientific value and beauty had declined over the years…

“It is with no doubt that we can point out that the Gardens has gone through, as we would say colloquially, some hard times over the years. And with the literature review, it helped me to understand the points of this,” he said.

Shallow noted that the Gardens has changed management many times, including during the colonial era, and was abandoned in 1849.

“We would have seen the Gardens in more recent time going through a bit more struggle, even moving from the Ministry of Agriculture, after being hit more hardly with the mealy bug and other different diseases and so forth…” he further said.

Shallow said the Ministry of Tourism, which at one point was responsible for the Gardens, “did a very good job of keeping what was left”, and under the management of the National Parks, Rivers, and Beaches Authority, there has been a “rise of the Gardens”.

Gordon said, however, that there has been a lack of sustainable financing for the Gardens.

The activities begin in earnest on Sept. 8 with a back in time evening.

A floral competition based on the national colours and symbols will be held on Oct. 27, Independence Day.

On Jan. 23, 2015, to commemorate the arrival of Captain Bligh, there will be a parade from Kingstown Harbour to Botanical Garden.

Captain Bligh first brought the breadfruit tree to St. Vincent, and one of those trees was planted in the Gardens.

Shallow said organisers of the celebratory activities are aiming in 2015 to have each student visit the Gardens, so that they can learn about its history, and be encouraged to study horticulture.

On Feb. 14, 2015, there will be a Valentine’s moonlight dinner at Curator’s House and the Amphitheatre, and a tree-planting ceremony on March 14, 2015 – National Heroes Day.

On April 21, 2015, there will be a treasure hunt for children and a cultural fair and family day.

There will be free entry to the Gardens for all national on May 1, 2015, when an exhibition of local art and talent will also be staged.

A three-day scientific symposium will be held in July and botanical gardens throughout the Commonwealth will be encouraged to come and celebrate along with SVG’s Botanical Gardens under the theme “The Botanical Gardens — From SVG to the World. Celebrating 250 years of Conservation and Bio-diversity.”

In August, there will be the launching of different agricultural plots, and the re-opening of once existing trails, and smaller herb and medicinal gardens.

The presentation of staff awards and recognition of benefactors, will take place on Nov. 27, 2015, followed by the lighting of the Gardens for Christmas 2015, from Dec. 16-24.