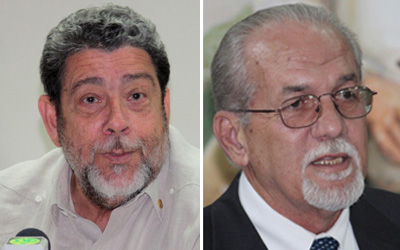 Prime Minister Ralph Gonsalves on Monday announced that the Ministry of Works will be moved immediately to the Office of the Prime Minister and Minister of Works, Sen. Julian Francis, will become a Minister of State in that Ministry.

Francis is also general-secretary of the Gonsalves-led ruling Unity Labour Party (ULP) and the development is in keeping with the ULP’s actions leading up to general elections, which are constitutionally due by December 2015.

The announcement, taken in conjunction with statements made by Gonsalves and Francis earlier this year, is expected to further fuel speculations that the government is preparing for early elections.

Gonsalves, in making the announcement on Monday, told a press briefing that he had written to the Governor General’s Deputy, Susan Dougan, concerning Francis demitting office as Minister of Transport, Works, Urban Development, and Local Government,“from today as soon the Governor General signs the requisite instruments and issues the constitutional requisites.

“The rest of the Works Ministry, which includes Roads and the Appurtenances, Sea and River Defenses, Buildings and Works, those would be handled directly by me. Of course, I am the minister responsible for those matters even for which Minister Francis is given special responsibility, but he will have day-to-day over sight of those,” Gonsalves said.

“Contrary to what a number of persons in the opposition may think, I do a lot of delegation,” added Gonsalves, who is also Minister of Finance, National Security, Legal Affairs and Grenadines Affairs.

Gonsalves said the matters he will address in the Ministry of Works are largely the big projects financed by the World Bank, the Caribbean Development Bank, the governments of the Taiwan and Ecuador, and the European Union.

“That is not going to add a terrific workload to me. In any event, I always say if you want something to be done, its better you give a busy man than a man who is not busy. My experience has also told me that,” Gonsalves said.

“I know that there has been a lot of speculation in relation to this matter,” he said, noting, “Minister Francis had made a statement, I understand, that there would have been some big announcement at the end of the month, August 31.

“Well I couldn’t make the announcement yesterday because it was Sunday. Can’t disturb people’s Sabbath with an announcement of this kind,” Gonsalves said in reference to comments by Francis on his radio programme that an announcement would have been made on Aug. 31 that would have put the opposition New Democratic Party in disarray.

The convention was held under the theme under them “On Yoh Marks!!! Forward to the Fourth Term. Let the Progress Continue.”

He further fuelled the speculations of early general elections in March, telling a ULP election anniversary rally, “Comrades, when I told you to go on your marks, I wasn’t making sport you know. …

“And I want to say this, as a man, further, from the country, is not long rope that does hang cattle, you know; is short rope.

“And we going gi’ (give) NDP a short rope as we go between now to the next general elections,” he said.

And, Francis, addressing a meeting of the National Omnibuses Association (NOBA) in May told minibus operators to take advantage of his position as Minister of Land Transport to try to organise themselves into a strong organisation.