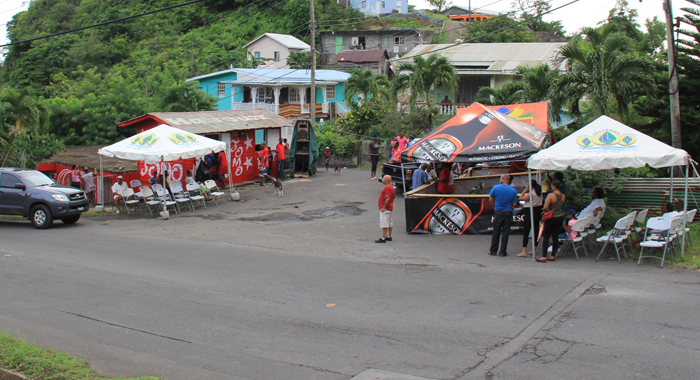 The office is located at the Chauncey-Clare Valley junction. (IWN photo)

The ruling Unity Labour Party’s candidate for South Leeward, Sen. Jomo Thomas launched his constituency office on Saturday, with a call for constituents to run with him to ensure both a political and health victory.

“You will see that our theme is ‘Run With Jomo – Win With Jomo’, we want you to be part of us. You can take ‘Run With Jomo’ to whatever dimensions you want to take it, but part of the reasons we put ‘Run With Jomo’ in there is because people in South Leeward, over the past 10 years would have seen me running most mornings,” said Thomas, an avid jogger.

“I am a runner, that may help to explain the body that you see me carry around. I have been a runner for 25 years; it is an absolutely important thing to develop. We know that there are so many people in our constituency who suffer from some of the maladies of diabetes, hypertension, strokes and so on. I do believe that if we adopt a healthy diet, if we burn off our stress, if we burn off more of the calories we intake, we will live much more healthy lives. And that’s why we have part of the theme ‘Run With Jomo’.

“If you run, your victory would become not just a political victory, it would be a health victory; you become more healthy,” Thomas said.

Thomas’ office is located in the property belonging to the late Robert Cottle at the Chauncey-Clare Valley junction on the main South Leeward Highway.

“We know that there is a lot of work to be done, we know that many of you are desirous of proper presentation, we are absolutely convinced that this team would bring the kind if representation that is critically important to this constituency,” Thomas said.

“This constituency needs a good voice, I offer that voice, and I am hoping that with your help, with your support, your commitment, your drive, we can take this constituency and build it into something that is the most dynamic, the most organised, the most supportive of this government that has done do much,” he told the small gathering.

Thomas said that when he started his campaign in February he told constituents that he wanted to be a candidate because he was convinced that the ULP has done “a significant amount of work over the last 13 years that has brought tremendous benefits to the ordinary people of this country”.

He said the party, which came to office in March 2013, had done transformative work in education and housing and “created a new environment on which the health of this country is built”, mentioning a $10.5 million loan to help in the fight against HIV/AIDS.

“These are all critically important things,” Thomas said, adding that he wants to be part of a government that is transformative.

Thomas, who became a ULP senator in September 2013, told the gathering that he is sure that his commitment, drive, and organisation of supporters will secure victory.

Thomas mentioned his training as a journalist, political scientist, lawyer, and in political economy.

“All of these I hope to bring towards better representation,” he said.

He said there will be important organising meetings in the constituency — in Rillan Hill on Sept. 6, Dubois on Sept. 13, and Penniston on Sept. 20.

“And that’s the way we intend to move through this constituency, building the organisation that is critically important to meeting with you, understanding your issues and concerns, critically important in terms of making sure that all of the persons who need to be registered are registered, to hear your needs to try to respond to some of the needs of the people of this constituency.

“This is an important drive; we want you to stay with this drive, we want you to understand and appreciate what we are doing. The Unity Labour Party is a party that has an outstanding record and we want to continue that record. We are going for an unprecedented fourth term, and we know many of you have benefitted from the efforts of the Unity Labour Party and we want to get that fourth term in. We want to ensure we continue to bring the achievements, to bring the progress, the development that the ULP has offered,” he said.

Thomas also responded to critics of the office building.

“Some person have already attacked us and say that our office looks trashy, but I want to tell you that we bring substance over form. We are here to bring a place in the constituency where you can meet with us and talk with us and as we go forward we are going to make changes that will help to make things even better. But the critically important thing is that we respond to all of the needs of the people of this constituency. With you, we are certainly going to be victorious, we know you want to see this community develop, we know that you want proper representation in this constituency.