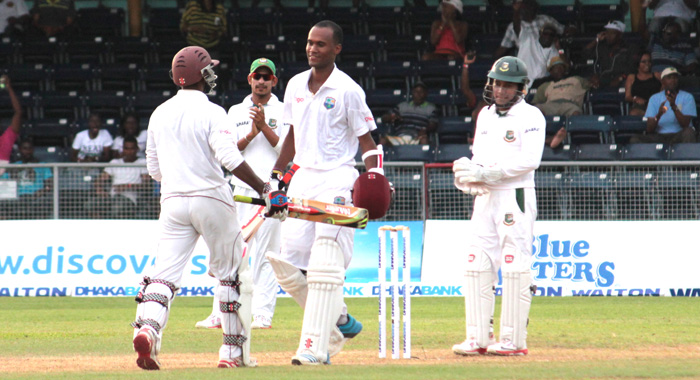 Protégé opener Kraigg Brathwaite hit a maiden test double century but his slow scoring may impact negatively on the West Indies pushing for a victory against test minnows Bangladesh in the remaining three days in the first Dhaka Bank test match at the Arnos Vale Playing Field in St. Vincent.

At the end of play on day two, Barbadian Brathwaite was unbeaten on 204 and with him was Shivnarine Chanderpaul on 51 with the West Indies at 407/3, made off 143 overs. The pair batted all of the 56 overs that were sent down on the rain-shortened day, adding 143 after the team had resumed on 264/3.

Analysts are of the view that the West Indies would have to take to the crease for an hour today in an effort to push the total as close as possible to the 500 mark.

Reaching his double century with a lofted shot over midwicket, Brathwaite became the third youngest West Indian behind legends George Headley and Sir Garry Sobers to reach this milestone.

The 21-year-old Brathwaite now holds the distinction of scoring the first double century at the Arnos Vale Playing Field and in the process collected the highest individual test innings, beating the 128 made by Bangladesh Tamim Igbal in 2009. He also holds the record for the highest individual score on the ground, beating the 203 made by fellow Barbadian Desmond Haynes in 1995 against the Windward Islands. His stay at the crease has brought century partnerships of 116 with Chris Gayle (64), 128 Darren Bravo (62) and 146 with Chanderpaul (51*)

But while the West Indies camp and fans would shower praise on the opener for his historic knock, they could be left ruing the slow pace at which Brathwaite and Chanderpaul collected their runs. Brathwaite was unable to score from 314 of the 437 balls faced — more than 50 overs!

He spent 39 deliveries in the 190s before slogging Mahmudullah — the same bowler he had hit to the boundary to reach his century on the first day — to the midwicket fence. He had reached his 50, 100 and 150 with fours as well. In all, he counted 14 fours in his more than nine-hour vigil, which is the highest score by an opener so far in 2014.

Chanderpaul, known for his pedestrian pace at the crease, showed little inclination to up the scoring and took 171 balls to raise his 63rd test half century as he and Brathwaite gathered runs against a tired looking Bangladesh at the rate of 2.49 runs per over.

Records show that since 2009, every team, with the exception of Zimbabwe, have gathered runs at more than three runs an over against Bangladesh. And, according to this information, had the West Indies continued from their first day rate of 3.31 runs per over, they would have reached 450 by stumps on day two.

One report said that despite being faced with a big score, the Bangladeshis, cognisant of the chances presented to them to draw the match owing to the slow scoring, had joked about not dismissing the slothful West Indies pair.

The day, which was anticipated as a series defining one, looked in doubt when heavy rains, which caused landslides and flooding in parts of the Caribbean island, lashed the Arnos Vale Playing Field overnight and early morning leaving a soggy outfield.

This resulted in three and three quarter hours being lost, but the ground, renown for its excellent natural drainage, had dried out in time for umpires Richard Illingworth and Marais Erasmus to begin play at 1:25 p.m.

Reports say that as per ICC regulations the umpires are expected to make up the loss over the next three days, weather permitting, with play starting at 9:30 a.m. today.

The visitors made life difficult for the overnight pair as Rubel Hossain used the new ball to nip past Chanderpaul’s outside edge and into the keeper’s gloves. The fielders went up in unison with a confident appeal, but the umpire disagreed. Captain Mushfiqur Rahim, appeared to have been misled by the noise of bat hitting ground, and in his eagerness to dismiss Chanderpaul, used the Review and lost it.

The new ball continued to present the slightest of opportunities by going pass the edge with regularity, but the elusive wicket did not come. And starved of run-scoring chances, the West Indies batsmen dug in for the long haul.

Left-arm spinner Taijul Islam (2/106) and his co-debutant Shuvagata Hom (1/93) also created some anxious moments but were unable to dislodge the pair.

Taijul in the process became the 13th Bangladesh bowler to concede 100 runs on debut.

One reply on “Pedestrian batting could hurt Windies”